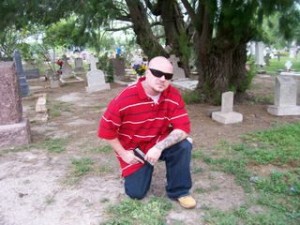 Most people might have never heard of you before – so who’s 6 Ether and what’s his history in a nutshell?

6 Ether? Da death deala? Well, Germany here I am! Y’all ready? I’m comin’ with some uncut hard-edged lyrics that are sure to push some buttons and stir some controversy straight from a criminal minded gangsta. My lyrics are a form of therapy for me. I express and release a lot of pain and anger on the mic. I can be myself 100% on the mic. That is the best place in the world for me. It is a great outlet. I have rappin’ about 20 years now. I was born in upstate New York but grew up in various low income communities and Army bases around the U.S. and even lived in Gießen, West Germany for three years in the early 80’s when Germany was still divided by the Berlin Wall. The places I spent the most time were New York, Colorado and Texas. I began rappin’ when I realized I was better at it then break dancing. Hip Hop flows through my veins. I originate from original sources of Hip Hop. I was supposed to record and album in the early 90’s with the original Jazzy J from Africa Bambaata and the Soul Sonic Force but I screwed up the opportunity because I was young, dumb and incarcerated. I left home and became a full-blown crime spree – thought I was grown. Now fast forward a couple of decades and now here I am. One of the last, possibly the last man standing from original gangs and cliques I was involved with. Alot of my homies didn’t make it, and I wish they were still here to see me now.

What has been the greatest experience in your life up to this day?

The birth of my daughter Maryjane. She has a small part on the album, which she wrote and performed over the phone with absolutely no help from me.

I chose the name 6 Ether because that is what Dope-E referred to me as when we first met. Simply put 6 Ether refers to a white or caucasian person. It is the opposite of 9 Ether, which refers to black people or people with more melanin in their skin, “melanites”.

What made you grab the mic at first?

Actually, I didn’t grab the mic first. At first I was a DJ. Before that a break dancer. When I discovered my talent was writing and rapping. I am product of my environment so the outcome is what I am now and that is goin’ to be a gangsta, criminal, drug addict, rap fanactic. I have got tons of material most of it still unwrittin.

Now we are getting into right knowledge and I am not going to get into that right now because there is just too much to explain. You can ask Dope-E about that then we can talk about Gods, eygpt and other intergalactic information. This album is a portion of my life story. 90% is actual factual, and 10% is my twisted, phsycopathic mind. Dope E supplied the beats, I supplied the lyrical heat.

How did the deal with Dope-E come together?

I have known Dope-E since about 2002. We met through a mutual friend and after a while started doing some recording together. Dope-E is a mentor and coach. He has helped me polish my rap skills into what they are now. He is one of the most talented people I know. I wanted to do an album with him and after a while it finally got done. I don’t think we even knew it would come out this good.

How was the work on “Da Death Deala”, could you just give us a little insight in the recording process? 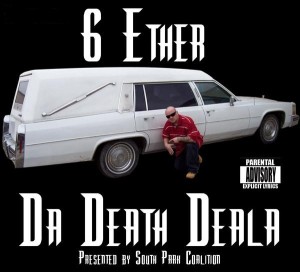 I just wrote the truth that I saw things and the way things are and the results speak for themselves. I would like to define what a death deala is. A death deala could be a drug deala, pimp, politician, hit man, arms deala, even someone sellin’ a CD with bad messages that could influence you to do wrong etc. You feel me now? The death deala is not so much about who I am but who I was. I am still very much influenced by that side of myself though. The recording process of the “Death Deala” was fun at times and other times frustrating and difficult. Making albums is hard work and serious business. You have to stay focused and persistent to have a good finished product. I have a love hate relationship with recording in the studio. I love to make new songs but hate being in the studio for long hours, but the final results are worth it.

How would you define your own character?

I consider myself a cool down to earth person from the hood with my own unique gangsta pimpin’ style. On the other hand I can be very self destructive, vengeful, and crazy as fuck. Don’t piss me off or fuck me over, you could catch a slug in one form or another.

Who is the most impressive rapper you know and why?

You asked who I thought was the most impressive rapper I know. I give that to K-Rino for paving the way for a lot of us in the Coalition and making rap look easy. He can go in the studio, lay down his lyrics and leave at light speed, and most of the time he is there if he is not rapping – he’s writting. Very Impressive!

Do you listen to any other music besides rap? What about your musical roots?

I like to listen to various types of music but I have a solid rap foundation. Sometimes I will jam R’n’B, Funk or even some Heavy Metal…

If you could work with any artist, who would that be?

Well, I still have plenty of artists to still work with in the SPC, so that should keep me busy for some time. Other than that, I do relate greatly with the music of Brotha Lynch Hung of California.

What are you bumping in your stereo these days?

I bump a lot of different stuff in my car, but most Westcoast Rap. I was raised by pimps and gangbangas. I have got a slowed and chopped double CD for sale online that my homeboy Icey Hott from street military mixed. It is real dope, too. It also has a sick ass album cover. Me holding an AK-47 in disguise.

In ten years I hope to see myself still alive and a few more albums under my belt, and enough money to live off of, but that depends on my success now. So, everybody show some love and buy a CD.

So do you have any last words to our readers?

Well, Germany looking forward to doing a show there in the future. With your help and support we can make that happen. For now kick back and enjoy some creative, new , pimp and gangsta shit in your ear hole.