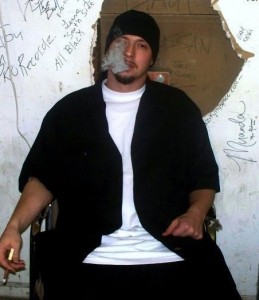 How come that a solo artist calls himself C-Mob?

When I was a freshman in high school, about 14 years old, I used to get in alot of altercations and people started calling me “Mob”. I’ve always been through alot of bullshit in my life, so when somebody asked me what “Mob” stood for, I’d say “Maintaining Over Bullshit”. I put the “C” in front of it ’cause my first name is Chris.

What made you grab the mic at first?

Stress – I found that it was a way for me to relieve it through words. I started writing raps when I was probably about 14. I used to rap in the hallways and the cafeteria in school. It continued to progress from there.

What can you tell us about your hometown Marion, Indiana?

One of the nicknames Marion always had was “Little Gary”. We don’t have the population of a big city but we got the drama. We got the crime, the drugs, the run down houses and factories and all that shit. Lately the city’s been trying to knock down some of the abandoned houses and buildings, but this town is still fucked up.

What about the support you get?

As far as support goes, you got your fans and you got your haters. Some show love and some are waiting for an opportunity to slit your throat and stab you in the back. We have no local radio, unless you wanna hear some oldies and shit. For HipHop and R’n’B we gotta tune to the Ft. Wayne and Indianapolis stations.

How many units have been sold of your first album?

I’m only in the four digit numbers right now trying to get up to five. We hustle this shit hard down here. Internet sales have been fairly decent, but for the most part we been moving alot of units hand to hand out the trunk. The day I can quit my day job and live off the income from my music will be one of the greatest days of my life.

I’ve been told that you’re a member of the “Royal Family”. Could you give us some further information about that group?

The Royal Family consists of T-Rock, DJ Cree, Me, Mossberg, Slikk, Seldom-C, Boss Minista, Unexpected, Flow Dawgs, Reek, Infrared, Shorty Roc, J Green and Hazardous. Right now we’re working on our first release. This will be the first of many…

What sets you apart from other rappers that are in the game today?

I can’t speak for the other rappers – but I just always put my heart in my shit and I ain’t one of these cocky ass rappers who just talk shit. I consider myself a regular down to earth dude.

What kind of rapmusic do you listen to these days?

For the most part I listen to that older shit. The shit that came out back around ’94 and ’95. I think that was when the best rap music was made. The newer shit I listen to is pretty much just Tech N9ne, T-Rock and a few others here and there…

So what does rap need these days?

Somebody to bitch-slap these nursery rhyme rappes who keep putting out this bullshit your hear on the radio. Matter of fact the radio stations and the record label CEOs need to get bitch-slapped, too – for allowing it to happen. Take rap back to when rappers were actually talking about something. Compare your average album from 2007 to Goodie Mob’s “Soul Food” or Outkast’s “ATLiens” album and see what I mean…

What’s going through your mind before you get into the studio?

Damn this studio time is expensive!!! *laughs* Naw, I’m just focused and make sure I’m on top of my game.

What’s the most important thing you have learned in the business so far?

That if you wanna succeed you gotta put your all into it. You get out of it what you put into it. I love my family and I love my music, but I hate the fact that there’s not enough time in the day to fully enjoy both. 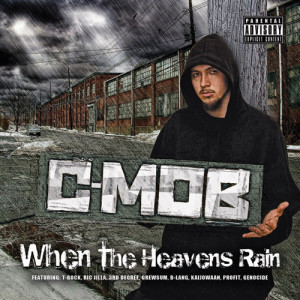 Let’s talk about your new project – “When The Heavens Rain” – who’s doing the beats on that?

Production was provided by my dude The Friedx outta Kansas City and my guy Koldkut from Marion. My dude Aaron Connir did the mixing and mastering on it, he’s a fucking beast. He mixed and mastered all the old bone shit, plus he’s got like 50 + platinum and gold plaques for other artist’s albums he’s worked on.

What’s the difference between “In The Midst Of Madness” and the new record?

The overall quality on “When The Heavens Rain” is alot better. Everything from production to mixing and masterin to the lyrics. There’a all pretty much two, three or four-syllable rhymes on the album, only a few with just one syllable…

Do you have any personal favorite songs on the album?

I’m digging all the tracks. But if I had to choose I’d have to say my personal favorite is “Forsaken Me”. It’s a deep song and we got real creative with the mixing on it. You’ll see what I mean when you hear it.

I just hollered at Rock one day and said I’d like to do a track with him. We talked some business and made the track for my album. I gave him a copy of my first album and he was really digging it. After that we clicked up and been making shit happen ever since. I’m featured on his new album “Da Kush” and right now we’re working on the Royal Family joint. It was basically just a real-recognize-real situation and we been making some good ass music ever since.

How are your experiences as an underground emcee in general up to this day?

Overall pretty positive. I treat people with the respect they deserve and most have done likewise. But experiences are however you take ‘em, I could have the most negative shit happen to me and I’ll turn it into a positive and learn from that shit and become stronger. I want to thank everybody for the support. Go grab my new album, you won’t be disappointed!