Creep Lo, your latest album “Da Creep Show” has been released in October. What do you offer this time?

What I offer this time is the greatest underground album that has ever been produced in the midwest! 14 songs of some of the tightest verses I have ever recorded! This album took 3 years to make and I actually focused on what my fans wanted to hear out of me. I listened to the fans and took constructive criticism from them on my previous albums and put all that into the focus of creating the new album. There is more of me for the fans to hear on this album then previous albums. 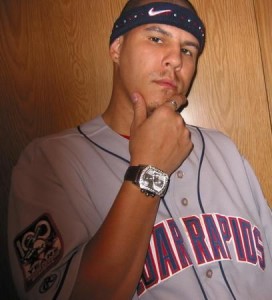 “Da Creep Show” also features some german support – how did that come together?

Actually a fan of mine and local german rap artist Hardiss emailed me about getting on a track of his and I thought about it and thought what a brilliant idea for me to network with someone who was also underground but from Germany. That way we could cross network and promote each other. So he sent the track and Tony Tee and I recorded our verses then sent them to him and he finished it up and sent it back to me mastered and all. I put it on the album and the rest is history in the making!

What about your connections on the national level? Who are you trying to work with?

I love working with artists that make me up my game and make me have to spit some raw ass shit! The first artist I would love to work with is T-Rock out of ATL. His flow is the blueprint to a perfect rhyme scheme! Just listen to how much heart and energy he puts into his verses, he is amazing! Other artists would be Tech N9ne, 3-6 Mafia, B.G., Crucial Conflict, Bone Thugs N Harmony. Producers would be Dr. Dre, DJ Quik, Jermaine Dupree, The Legendary Traxster, Scott Storch…

You’re the owner of Drop It Off Entertainment – how hard is it to run a label by oneself?

Well anyone with a few brains could have their own label and put out an underground album – but to run it, maintain it, and consistantly produce albums, promote them and put money into each project is the hard part! Every album I have put out has been entirely by me. I did the promotions, I did the advertisements, I put my hard earned money into making the albums so basically what I am trying to say is: it is very hard to take on all the tasks that comes with making the album without some type of financial backing because without it it puts alot of strain on everything around you. Relationships, friendships, family and just everything around you gets extremely tough!

Give us a short overview over the label history – what have been your highlights so far?

Short overview… been in the game since highschool. Started up my own label in Iowa in 1999. I have produced 7 albums, 3 solo. My highlights….*laughs* uhm, let me see. I haven’t really had any highlights happen yet! The one thing that stands out in my mind is when we brought Traxster and the CWAL MOB to town for a birthday party. They were just supposed to come through and mingle with the crowd and they must have been feeling the atmosphere because all of the sudden DJ Slugo goes over to the DJ booth and just takes over and starts playing that Chicago House music and then everyone jumps to the dance floor and then Drop it off Entertainment performed as a group and after we finished CWAL did a performance that they wasn’t even supposed to do and it blew everyones mind! Afterwards we had a huge afterparty at the hotel and I ended up smoking a Huge Marley junt that I rolled up and smoked with Traxsters brother Dun D – it was just a good memory! RIP Dun D….

How do you rate your early works from today’s point of view?

My early works were basically just learning blocks to me honing my style and my production skills that I now have today. I mean it takes time to make fine wine! Now lets crack open a bottle and toast!

What can we expect for the future? Will there be any solo projects from new, previously less heard artists?

Mane, the future is wide open dawg! We got my man Tony Tee getting ready to drop his mixtape album. This will be a collab between my label and his. I wanna produce an Iowa compilation with some of the rawest rappers from all over Iowa. I did sign a new artist that is about to take this whole evil-gangsta-horrorcore shit to the next level! His name is Yetti. His verses are so fuckin’ sick and his rhyme scheme is so intricate, its ridiculous!Just wait until his solo album drops….no joke! He is like Tech 9 mixed with Necro! Also Yetti and I are working on an E.P. right now titled “Heat Up The Block”. Then I will be dropping a new solo album next summer. The album will be called “Making My Own Graveyard”, produced entirely by Medicine Man. That is my new producer. He resides in ATL. He is super sick with the beats!

You’ve been affiliated to Evil Pimp from day one – what do you appreciate about him as an artist?

I appreciate his gutter attitude, drive and his love for the underground sound! He is one of the best underground producers that I have ever heard.

Will there be futher collaborations with him?

We will have to wait and see.

Are you jealous on his latest success? If I got things right he has even been featured in Murder Dog Magazine…

Nah, I am happy and proud of the success he has had over the years. When we both got together our dream was seeing our names in magazines and shit and Murder Dog was one of the magazines we were shooting for and now he done done it! Now it’s my turn dawg!

You both hail from Iowa which still is something like a dead spot on the music-map. What are you thoughts on the local scene?

The local scene is really jumpin now! The Orginal G of this Iowa rap game is Sonny Money. He is the pioneer of rap here in Iowa. He had a group back in the days called Black Mobsters. They had a major deal through Universal but it ended up falling through. He back on the scene now and getting ready to bust things wide open. He is the one that inspired me to keep rap alive in Iowa. Then we got Out The Trunk Records with Slick Da Kid running that label. Very smart and talented young producer. Then we got a group thats really making alot of noise called Big Bang Records. They have a huge following and a huge street team! Don’t sleep on Tremayne of Straight Vodka! He is one of the sickest rappers I have ever heard and yeah – he from Iowa!

One of your friends/artists passed away in 2001 – of course I’m talking about Lil Bout It. What happened back then and how do you keep his memory alive?

What happened was as we were getting ready to start recording tracks for his new album he ended up catching the rabies virus without knowing how he contacted it and ended up passing away right before his 21st birthday. RIP Lil Bout It! That was my dawg! He always repped Drop It Off Entertainment everywhere he went! He was a soldier dawg! I keep his memory alive by featuring unrealeased material of him on future albums. He is on two tracks on the new album and when I go major he will be on a song that I have stashed away. We always talkin’ like he right in the room wit us – he’s not dead but gone!

Have I forgot to ask about anything? Get it off your chest now…

Big shout out to Hardiss from Germany! Keep making them underground hits dawg and thanks for all the connects! I just wanna say to all of my fans that I went through a lil experimental phase after the first album came out and now with the new album selling out everywhere that’s the proof that the real original underground Creep Lo is back! Drop It Off Entertainment is gonna be bigger and better and more sick than ever! Wanna give Germany a shoutout because y’all love this underground shit and for that I love y’all. Hopefully we will get some nationwide distribution or a creative label deal sometime in the near future.

‹ The Jacka – The Jack Artist