Let’s start with a fresh and not too good issue, that you had to cancel the European Skarhead tour. Anything you want to get across about that?

The booking agency that we use really fucked everything up. They totally dissed us and played with our heads for fucking weeks. They are the worst booking agency in Europe and every band will tell you that because no one is happy with them. We had to wait a week in NYC wasting time because they couldn’t even get booking tickets right! Fuck them. 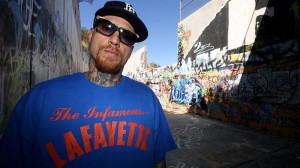 Now that you are after a couple of touring cycles with the “new era” Skarhead, what are your experiences, how you feel to be back with one of your main band?

Puerto Rican Myke is back in the group and we got rid of that faggot Ceekay. It feels so much better to be in a band that everyone respects each other and actually will die for each other. We are on all the same level and we love touring and making hardcore music. No one wants to wear tight pants and flat iron their hair like a little bitch. All hardcore niggas in this band.

Your solo album, “International Hardcore Superstar” is a mixture of different styles. What does it mean to you as an artist? Can we say that musically this is your ultimate expression what you are all about?

Yes I express myself through my music and this album was a rollercoaster of emotions. It actually almost took two and a half years to make and over a year to release! The album is the best work I have put out so far. I love this album and it is very personal. I had fun making this record and I want to thank everyone who made this record with me. I would also like to thank Tim Armstrong for believing in me and giving me a chance. Hellcat baby!

You’ve got production from DJ Muggs on it. How you enjoyed to work with him?

Muggs is a good friend of mine. We chill all the time but it was great to be in the studio with him. He is one of the dopest beat makers and producers in the world. I actually think that Muggs and Marley Marl are the best period. Sorry Dre. 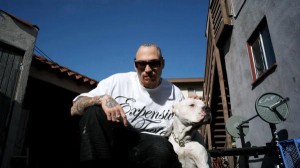 You are very close to Necro and Psycho + Logical-Records. How the friendship came together? And you had a project called Jewish Gangsterz, whats the deal with it?

Necro is my brother. I love Necro and got his back when it comes down to it. We are very close but both of us are always on the road so it is hard for us to chill lately. We speak all the time. Jewish Gangsterz is on hold cause Necro aand Riviera Regime had a falling out. They are cool with each other but they aren’t working together anymore. I hope they work it out cause I love them both. Hey that’s life…

You are a very integrated person in the whole NYHC scene, helping to your peeps through producing and putting out their music, and always representin that unifying message, not just at your DMS crew, but everywhere. Can we say that this is a “mission” for you?

Well my word means everything to me. My father taught me that. He also taught me respect. I am a street kid from Jackson Heights, Queens and I grew up listening to all types of music. I found my home early on in the N.Y.H.C. scene and I am very proud of that. I made a movement and it is going real good. I actually mixed the hardcore and hip-hop underground scene. Now we got mad heads down with each other. PLR, Soul Assassins, DMS, ILL-Roc, N.Y.H.C, Psychos and many more heads. Thug-Core 4 Life!

One of the greatest NYHC band ever, Sick Of It All is back with a new record, called “Based On A True Story”. Did you hear that? How much did they influence you back in the day?

I love Sick Of It All. There 7 inch was like the bible to me in highschool. They are hard workers and good guys. I haven’t heard the new record but I will get it from Craig Setari. Craig is my brother. They are from Queens also so you know I got love for them. They actually were the first dudes to take me outta Queens on tour as a roadie in 92. They ruined my life! *laughs*

You live in L.A. for couple of years now. Did that affect your musical taste or artistry in any way?

I am more relaxed. I got my shit together. I am more focused and I guess my music is a little L.A. influenced now. I got the best of both worlds. N.Y. and L.A. To of the dopest places on earth.

Which books are your favourites? How much do books inspire you?

I am related to the famous winner of Nobel Prize in literature, author Issac Baschevis Singer. I read all the time and I definitely love his work. I am reading his book called “SCUM” right now. I also like Neil Simon’s “Brighton Beach Memoirs” and “Lost in Yonkers”.

What are your future plans?

I am touring Europe with Danny Diablo in October with Grizz Rock, Panic , Stress The Whiteboy and Skam Dust. Risky the graffitti artist will be on the road with us doing his art while we perform on stage. Then we are gonna raffel the canvas at the end of each show! Gonna be a big tour. It is called “THE ILL-ROC FAMILIA TOUR”. I am also putting out Street CDs for U.G.P., ADLIB, Jimmy Williams( Maximum Penalty), White Owl, Panic, G-Fella on ILL-ROC Records this year. I am producing the new Panic full length with Stess for Krush Unit Records. Just did a song for Holly D. the porno star for her new movie called “Porno-Core” with Grizz Rock, Adlib and Biz Mighty. Stress The Whiteboy killed it on the production tip. I also just did a song with my man Chino Brown from L.A. … I know there is more shit but I am burnt!

Any last thoughts to the readers?

‹ Grimm Real – Demise Of The Clone