Who am I talking to?

Where do you come from and how was life growing up there?

I come from Shaolin New York, Staten Island. It’s just like anywhere else that you got alot of bad like poverty in the hood, you know, in the ghetto whatever, nahmean? Projects, it’s real life. We experience real things, nahmean? That’s my experience where I’m at. 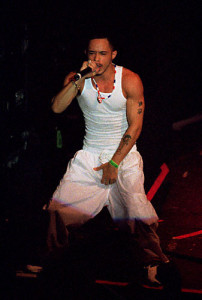 Can you still remember about your first contact with HipHop?

I’ve been touching the mic for a while man, since I was 9 year old. I was always about the music man, nahmean? 9 years old I started rapping.

Well, I was influenced by The RZA. We were from the same hood, right across the street. I used to be with him for a long time.

And how did the Killarmy come together?

RZA’s little brother dwelled right across the street from me and we became friends. That’s 9th Prince. Since we were young, since we were 8 or 9 years old we were friends. Killa Sin lives two blocks down, Islord reached to the same area but 9th met him in Ohio and the other group members is from Ohio that’s where we met them at. Me and Sin, we from around the same area. And then 9th moved to Ohio and he met Shogun, 4th Disciple and Beretta 9, nahmean? That’s how we came together.

I think the “Silent Weapons” album is one of the hardest albums ever to come out from the Wu-Tang Camp. You recently released your first video single “Feel It” and many people say that the Killarmy turned soft …

I don’t think it’s soft. That’s just a real experience what we talkin’ bout that the fans can feel it. I don’t know how to understand the fans, it’s like that. We talk about real stuff. We in the ghetto. If you look around we with the kids in the ghetto, you gotta get back to them, nahmean? You gotta still deal with the youth and still be intact with yourself and have some kind of discipline in life, nahmsayin? It’s war but then there gotta be peace within that war, nahmean? Do you feel me?

Well, so I don’t know. That’s why we came with that. But it’s not about being soft, man.

I think you can still remember 9-11. How did you experience that day?

It was just bad for everybody in New York, it’s just crazy. I was here, I was not too far, man. I’ve seen it on TV, I didn’t actually go to go watch it, nahmean? I stayed in the house *laughs*

Have you ever thought about changing your name or your image after this incident?

Has there been any negative reaction your your old name?

Nah…Nah…not really, man. People talk shit and say shit and say alot of things about Killarmy. Foul political shit that I’m just tired of hearing but besides of that it ain’t effecting me, man. I’m still selling units, nahmean?

Mhm, I’m asking you this because as I searched for some information for this interview in the internet I discovered some redneck-websites, whatever, that accused the Killarmy to be a racist group, especially regarding the first two albums. What’s your opinion about that?

On that subject, nah we ain’t racist, I ain’t racist. We just speaking our mind on some kind of subjects, nahmean? And people taking it bad, everybody is tied to an opinion. You never hear me sayin that im predjudiced, you can quote any of my lyrics That’s how they feel, they don’t quote me on something, cause I’m never sayin that I’m predjudiced. I’m just speaking for my self. Like I said: everybody is tied to an opinion.

Will there be another Killarmy album?

Islord and Killa Sin are incarcerated right now, when will they be out and will there be any solo stuff coming out then?

And will there be a second part of the Killarmy DVD “A Day in The Life”?

Let’s talk about your music … what’s the difference between your solo stuff and the Killarmy albums?

Your debut album “Tera Iz Him” was an internet release. Is it that hard to get some distribution?

I didn’t really want it to be everywhere. I had the material for a while, it’s older material. It’s like a younger PR, nahmean? I just released it exclusively for the internet, ya feel me?

Are you content with the reactions on “Tera Iz Him” and “Unreleased”?

Yeah, I had a lotta love on that, I’m still gettin’ love, it’s still sellin’. While it went out we just sold out, it’s no more. So anybody can’t get them, they gone. It sold out so it’s no more of those, man. You can’t get it. It was limited edition, if you’ve seen it on the cover, that’s it. If somebody got them right now, those gon’ be the only people who got them out there in the world, man.

And what about your next album “DOMination”?

Well I don’t know when I we come out with that. I got something else that I come out probably before that, it’s called “One Man Army”. It’s already like 50% done. You gonna hear some new 4th Disciple beats on there, you gon’ hear alot of Dom Pachino production on there…

How would you compare this coming up album to your last two albums?

I don’t know man. This is a question I can’t really answer. My music speaks for itself. They gonna love it, it’s raw, You gonna hear some raw shit.

And where do you see yourself in 5 years?

In 5 years? I told myself I wanted to be in the Forbes. Hopefully I can do that.

Could you imagine to record a non hiphop-album or to work with any non-hiphop artists?

I got two ordinary questions to finish the interview, first one: what’s the best Wu-Tang album ever released?

“Dirty Weaponry”, that’s my favourite album of all times.

And what’s you opinion about the rap game, about the competition? Do you still feel it?

You know, some brothers are still doing their thing but overall not really, not too much, man. Seems like it is at the end of the summer, you might hear some sound bumping on the airwaives, something heavy for me, ya know?

Do you have any last words to the people?

Yeah man, just let ‘em know my album is available right now and you can get it in Germany right now, it’s on sandboxautomatic.com. It’s available for the masses, so just log on and go support it, man! It’s good, man, it’s good shit.