I started rapping when I was about 15.

What inspired you to do it?

All the kids I hung around in school would freestyle, and it just became a routine thing.

Can you remember the first record you’ve bought?

I think it was Run DMC’s King of Rock. 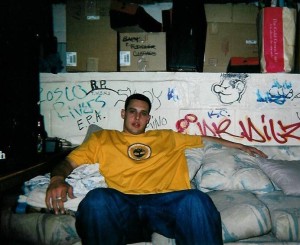 What does your daily routine look like? Whats the first thing you do when you wake up?

When I wake up I take A big ass hit off the bong, maybe toot A little, feed the sorry mutha fucka I got locked in the basement A little bread and water or somthing. Write A killer rap, Jack off, maybe make a beat, smoke some more, then go back to sleep… Naw im playin. I got A job like most of the rest of you mutha fuckers.

Where does your music gets the most response from?

KC mainly, but I got cats from all over bumpin it.

What do you think about artists like Tech N9ne, Lejo, Dove Dawg, Hobo Tone. Do you like their style/music?

All of these cats are tight, anybody doing there thing out of KC gets nothin but love from me.

What about the musical support in Kansas City? Are there any radio stations playing local artists’ music?

I’ve got a good local following. There’s a few stations out here that play local shit, but my shit’s to dark to get air play.

Did you ever work with rappers outside of KC? Is there anybody out there you would like to collab with?

I worked with a cat from Virginia named Swan, and my boy Young Hype from St. Louis. There’s a lot of people I wanna work with. Brotha Lynch, ICP, 3-6 mafia, maybe Ganksta Nip.

How did you come up with that whole concept for Dr. Dilznik?

I was buying some shit from a local record store here and the guy at the counter asked me my name. I told him it was Dizzy D. He said “no shit there’s a dj out here who goes by DJ Dizzy D” I said ” fuck it im gonna change my name to Dr Dilznik, or some shit.” On the way home I was gettin all these crazy ass ideas for songs. It just fit so I rolled with it, and here I am. 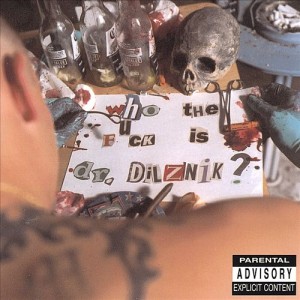 How much time does it take for you to finish a song?

It all depends on the mood im in. If im workin with somebody else we Knock it out, but if it’s just me I like to take my time on it.

Beatwise, what kind of equipment do you prefer?

Any quality keyboard, and a turntable.

When I describe your music to other ppl I tell them that it sounds very special and original and in my imagination your sittin all alone in a dark studio with a lot of crazy depressed thoughts lettin everything out….lol. Is this some kind of your theraphy Dr. Dilz?

You hit the nail on the head . Like I said, If it’s just me I like to get some good drugs, sit in my basement, with some candles ,or a blacklight and just vent. Yeah it’s like therapy. If I wasn’t rappin I guess I would be writing books or something.

Who else is producing your music?

My boy The Last Rekrute, and Bruce ILLest.

How did you hook up with The Last Rekrute? Will there be a group album?

We’re cool. We’ve known each other for about 20 years. There will probably be some stuff in the future. Right now we’re just workin on our own shit.

What have you been bumpin lately?

Of course Iv’e been Knockin my own shit. I like to listen to all kinds of shit. In my CD changer right now im playin that Run DMC’s greatest hits, The Diabolical Biz never sleeps, Cee- Lo , Devin tha Dude, and The Last Rekrute’s H.Y.R.B.

Please name 5 books and movies that influenced your life?

I don’t read very much but the last books I read were:

Can you make a living outta sellin records or do you got a 9-5 job besides the music-biz?

Hell Naw! I wish I could support me and my family off of this rap shit, but right now im 9 to 5in it.

Is there anything coming from you that we should look out for?

Any last words for the people out there?

Yeah I’d like to thank everybody out there for supporting me. Much luv to www.ugrap.de. Keep bumpin that KC killa shit, and be on the lookout for the new Dr Dilznik CD comin this fall. Peep the website www.drdilznik.com, and buy both Dr Dilznik albums at www.cdbaby.com