How are you doing Enfenetee? Introduce yourself to the people in Germany please.

I am a hardcore female rapper that comes from the U.S.A. My style is bold and aggressive.

How does your life look like in the city of Baltimore?

Baltimore, Maryland is known as Body-Morgue, Murder-land so I think that is pretty self explanatory. 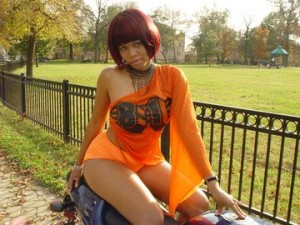 I think it’s nearly impossible to classify your style. Any suggestion?

You’re right. The best one could say is I’m a versatile hardcore emcee.

What inspires you to write such sexually aggressive lyrics?

I inspire myself to write sexually aggressive lyrics. I am a very sexually person who is not afraid to express it. The things I write about are not for the faint of heart. Life is not a soap opera or field of roses nor is sex. Everyone likes a little spice in their life whether they want to admit it or not. I am just the one with the balls to do it.

Should we understand the dominatrix-thing only in a metaphoric way?

I am a very open minded person, my listening preferences range from classical to hard rock to rap and everything in between.

You’re also into modeling and can be seen on TV – tell me something about your activities besides music.

I host my own television show called XPOSE which spotlights independent artists in the fields of music, arts and entertainment. I had a role as Poot’s girlfriend on HBO’s series “The Wire”. I have appeared in numerous print ads such as XXL and Black Men’s magazine. That’s just a few of the other things that I am currently involved in. 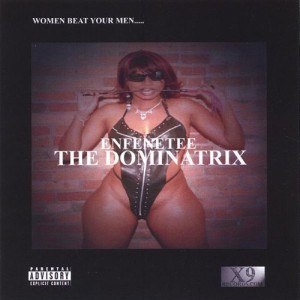 What will happen in the future, where will you set your main focus on: rapping, modeling of acting for TV? Are you already working on some new music?

My main focus is always on my music. Eventually I will begin producing some of my music. I have just released a 20 track all female mixtape entitled “THE X CHROMOSOME” featuring some of the hottest female playas from across the U.S. – U GOTTA PEEP IT on the real. I am also working on my next album due to release some time this year. I am very excited about the upcoming album.

What about the public reaction on your hardcore-image?

My fans are extremists like me. Either they love me or they hate me. Everyone gets negative responses about them at one time or another. It amazes me though how people can hate my music but love my pictures. I take the negative and use it as fuel to keep going. Haters can be great motivators.

Do you see yourself as some kind of female counterpart to pimp-rappers like Akinyele or Too $hort?

No, I don’t see myself as their female counterpart. I see myself as a pioneer in women’s sexually suffrage movement. Women have always had to fight for their rights. I know we have the right to be free sexually without condemnation. Women have to realize the power we have. The pussy got the power to tame a man!!! That’s the truth.

How do you comment the situation of today’s female rappers in general?

Female rappers are the minority. It’s a constant struggle in a male dominated field. I like Lil Kim and Eve to name a few.

Most eurpean media paints a prudish picture of America. So what’s the real deal? 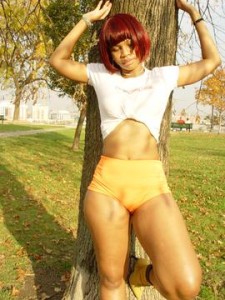 America prudish? Those two words should not even go together. America is the land of the free. Anything goes.

You use your body for your purposes, I can imagine many women don’t support that….

For the women who don’t like it that’s probably because they don’t have it. Emancipation is different for each person. What works for me may not work for you. So use what u got to get what u want. HATE THE GAME AND DON’T HATE ME- That’s real and the real women know where I’m comin’ from. I didn’t make the game, I’m just a playa.

What’s your opinion about censorship in the media?
Censorship has its place. I don’t think my music would be appropriate for a Disney movie. But when I got some shit on my chest, I’m gonna spit And if the shit is about you, I’m gonna tell you to your face and tell yo momma what I said and then put yo ass in one my songs and tell the world you a BITCH and whoever wants to listen to it, it’s on them. WORD.

Time to give some shoutouts!

I would like to thank you for doing the article. I would also like to thank x9records.com and all of those who support me in all my endeavors in the seen and the unseen.