I talked to you in spring about your new album, life and so on. You said you have to struggle a lot, so how you doin’ today?

I am happy with my life even though I may not have everything I want. The reason is simply because I have everything I need. I am satisfied with what I have but at the same time, very motivated to do more music.

Not many artists can produce, record, mix and engineer their own material. You seem to be one of these hard working and talented artists. What made you to the man your are today? 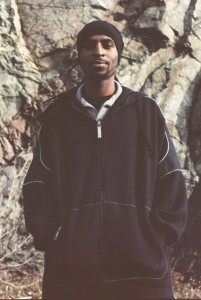 Thank you. Well everything starts with an idea. I usually have a whole song in my head. I know how I want it to sound after coming up with a concept or vice versa. I like producing and writing because I can manifest sounds in my head into a fully completed composition. That’s like making your dreams come true everytime you sit down to do a song. The thing that makes me who I am is learning to respect “time” at an early age. My goals were simple… To make my passions support me financially. The earlier you realize what you have to work toward, the more sacrafices you make to have these dreams and goals become reality.

Finally, after releasing your last album “The Maysun Project”, you drop your new one “The Blast Radius” around these days. How long did it take to get this album done?

Whats the meaning behind the album title?

The Blast Radius is the area where the album has impact. Ususally there is heavy damage and high numbers of casualties. The LP will start in major cities and record strores, then burn through stages at live shows. The first letter of each song spells the title of the album hinting the organization of the concepts in the album.

Compared to the work on your album “Updated Software 2.5″ what was different about “The Blast Radius”?

Updated Software was a compilation of my older material. It was my first album and I had no idea what I wanted people to hear. I just knew I had a lot of beats, rhymes and songs recorded. I mean I even had Updated 3.0 ready to be released as a follow up album. The new LP was put together with the whole theme in mind from the begginning. The vibe is more consistant as well. The Blast Radius includes informative information over more precise sample slicing and drum proggramming.

Any features on the album we can look forward to?

You founded your own label this year and also release your new album on it. How did that happen and do you plan to sign some artists on it?

I am fully involved in what goes on with my releases. I have a lot invested in my releases since I produce, rhyme and record most of my own material. It’s hard to put all of that into someone elses hands. I also want people to know that they can have faith in a lable with a consistant sound. My lable is a production based lable. You will be able to hear all of my works in one place. Adad, Dagha, Fine Artz, and Midnight Shipment are of the first phase of releases. These artists are not amatures. We will all tour together and gain our place in this industry by showing and prooving live on stage. 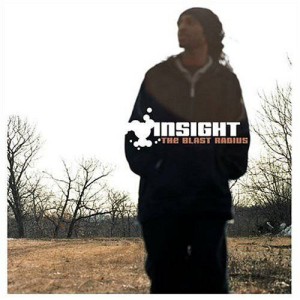 Let’s take a walk into your history as a musician. Why did you come up with the name ‘Insight’?

My boy Curtis gave me the name Insight. Before that I had some names that sound funny to me. People in my local area started calling me Insight “The Truncator” back in 1996. I used to focuss on making freestyle tapes and passing them all around Boston. The tapes had custom beats that were extreemly chopped up or “truncated”. Curtis used to say I had crazy ideas for anything I did and started calling me Insight nomatter what name I had.

When did you start with producing and rhyming and what were your major influences in your early years?

I started around 91 with the Prophet 2000 keyboard. I got it for free from my man Rocco. Cee. I’d take samples directly from the radio and make music. Then i’d record one take songs with the beat playing in the background right onto cassette. My major influences back then was marly marl and 45 king.. Albums I was into was Funky Technitian (lord Finness), Special Ed- The magnificent, Intelligent Hoodlum….hip hop from that era.

Do you think that you changed your style over the years?

I think that my skills evolve and improve with practice over time. I fine tune my artistic impression with every composition. That should be the goal of an artist if he plans to break bounderies.

I heard that you lived in Germany for some time. What were you doin over here?

I lived with my family in Heidlberg to spend time with my sister, niece and nephew.

Boston has a unfortunate image as a racist and conservative city. Is it hard to make a living of music in such a city?

The good thing about being an artists is that your talent creates opportunity.

Did you ever thought about moving away from boston?

There are so many beautiful places to see in the world that now I’m not really sure where I want to go. First it was France, then Japan, next California… now I have no plan. For now I’ll just visit different places for extended periods of times.

As a member of the Hip Hop scene in Boston, what can you tell us about it? Any upcoming artists which are worth mentioning?

There are a lot of artists in Boston. I really don’t know what everyone is doing but I mentioned everyone on the credits of The Blast Radius. 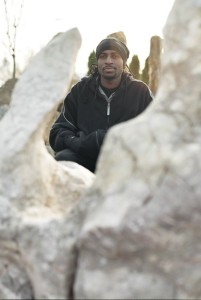 What’s your opinion on the other Hip Hop artists from Boston. As you know, Esoteric got into a lot of beef last year. What do you think about it?

There are plenty of talented artists in Boston. It is up to each one of them to determine how they will use thier talent. You can use your talent to attack, build or destroy. Because I used The Blast Radius to mainly empower others artists, doesn’t mean that that I am better. Beef is beef and thats between the two people in disagreement. Rule one is to never go out like a sucka. That’s a hip hop thing. I didn’t pay any attention to that beef so I really don’t know about details. Anyways, for some listeners beefs and battles are entertaining but when compared to the problems of sociol engenneering or the gifts of nature…battles should not be held in high regard. I can’t blame anyone for handling a beef with a rhyme because thats better than violence and remember that the fule of the fire in this situation is people posting in forums and writers instigating in magazines.

In the past you produced some tracks for Mr. Lif and you’ve been featured on his “I Phantom” LP. How did you meet him and are you still in conctact with him?

I talked to him breefly a couple of months ago. He used to come to my apartment in Dorchester back in 1996. I was introduced to him by Soul Flower.

Do you got any plans for further collabos or do you plan to form a new crew?

I only plan do work with my friends. Right now i’m working with Edan on a project and my new group Midnight Shipment. Edo, Jaysaun and I also have a lot planned for the future.

In August last year you planned to show up with Lif, Akrobatik and Edan in Germany for some dates. What was the reason you and Edan cancelled the tour?

I really wanted to do the tour but the business organization went bad for Edan and I and would have set us back a bit.

This year everything has been different. You toured with Ed O.G and Masta Ace all around the world. What did you experience?

I can see where Hip Hop is presently on a global scale. Touring the world in a short time helps you to understand the general difference in taste in different places in the world. Touring with Ed Og, Jaysaun and Masta Ace in Europe allowed me to tweek my analasys.

Besides Hip Hop, do you got any freetime activities?

Activities are limited now that my goal is to stay on tour to expand and explore. I’ve been gone since Mid March and will return home on the day The Blast Radius get’s released on Augus 24th

Where do you see Hiphop in 10 years? Will you still be a part of the movement?

Hip Hop is a hobby first and not a sacrafice. It’s also a good habbit that I never plan to quit. In ten years all the fake cats that people follow now won’t mean shit. They will be forgotton and the good hip hop people slept on will be collected and respected by hip hop classicists who maintain the foundation of the music we know and love.

Any last words for your fans who will read this?

Nomatter what anyone says, do what you believe with confidence and surround yourself with others who believe in you. Having people around who are on your side is good because they help you grow. Go back to your original crew and strenghthen the bond. Then rise together. Thats how you succeed. What good is being on top of a mountain if you have a bunch of fake cats around to push you off.