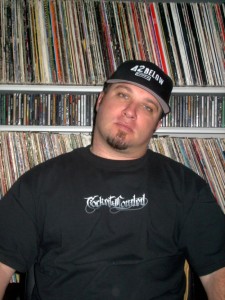 Hi JZ, you’re pretty much known as one of the top notch producers from the golden years of the bay area. I been jammin’ your shit since like 92…tell me which groups did you produce through all these years?

How did you hook up with N2Deep and how did y’all work out the contract with Profile?

T.L. and I were homies since the 1st grade and he hooked me up with Jay Tee who was T.L.’s brother’s homie. We started making songs together and about 3 years later we had a pretty solid demo tape together, so I hired a consultant that got us a deal at Profile. We overnighted Cory Robbins (co-owner of Profile) a cassette tape and the next day he offered us a deal. He was blown away with “Back To The Hotel!”

Why was the second N2Deep album not on Profile?

We kept submitting songs to them and they kept turning them down. After a while they told us they were getting bought out and were basically going to dissolve the company. We luckily negotiated a release and we went on our way.

What are you doin’ now, and why did you move to Vegas?

I got married and was burned out with the Bay. I needed a change, so we moved to San Diego, CA for a year, then took advantage of the inexpensive housing market in Las Vegas and bought a fat crib out here. Vegas is the shit! I like it a lot here because the city never sleeps and there so much opportunity out here and so much to do. It’s weird not living in Cali anymore, but Nevada is sweet!

I know a lot of people that love that JZ fonk – will we ever hear some new stuff from you?

Yeah, music is in me fo life! I’m just trying some other moves out here in Vegas. The music business is slowly starting to grow out here and I’m still a producer at heart. I still work with Jay Tee and DRU, but I’ve been laying low. I still have a studio “The Dirty Martini Lab” and I still do some recording. It’s not over, it’s just not in the forefront for me now as much.

Have you decided to stop puttin out Rap when you moved to Vegas?

No, I’ve just been messin’ with other styles of Hip Hop. I started a Hip Hop Lounge Series called “Luxurious” which is instrumental Hip Hop Lounge Music. I’ve really been bored and unmotivated by the rap/hip hop music being released these days. I’m trying to take it into a new direction. I see it as, soon, everyone will want the Hip Hop Lounge sound, they just don’t know it yet.

I know that a lot of dudes in Germany idolize you as THE ONE who produces Vallejo shit, I’m a huge fan myself as you already know – I listened to the first p² album a lot. And my favorite track was “Strivin'”, with The Young “D” Boyz. “Where We Dwell” with Mac Dre is also one of my favourite ones – I would be so glad if you would put out stuff like this for the next few years. So, has feedback from the listeners been important to you over the years?

Very important! I always listen to what the fans have to say. I love the fact that people, like you, even care about what the Bay and especially Vallejo has done in music. These interviews are what motivate me to make more V-Town Music! I still have my website: www.jdeville.com and I still answer all my e-mails and ship out any CD orders I get. I love the fans, they’re what keep me going! Also I have a My Space page http://www.myspace.com/jdeville and http://www.myspace.com/luxuriousmusic

Have you ever been rappin’ on any of the albums you produced or did you always stick to the production work?

I’d have to say when N2DEEP first started making songs, we were called “3 Deep” and I was a “rapper” but I realized that the music is what I loved, so I quickly took a backstage roll in the group. Even before N2DEEP, I’ll admit that in college I was an underground rapper. I made a few solo albums on my 4-Track tape recorder. Only a handful of unlucky people got to hear those.

When did you start making beats, and what was the reason for you to get into it?

It all started in 1989 at Sacramento State University. DC (Tag Team Crew) and I met in the dorms. He was a DJ and I was a Rock guitar player. I bought a 4-track, he had turntables and a mic and we put it down. I later bought a TR-808 drum machine and an Akai sampler and it was on! DC was the guy who converted me from Rock to Rap. It was all about Run DMC, LL Cool J, Beastie Boys, Eric B. & Rakim, and 2 Live Crew!

What did you work with back then?

Do you still remember your first release ever? Did you release tapes back in the days?

The first real release was N2DEEP, “Back To The Hotel” and yes I definitely remember that! The stuff before that was all practice for the real thing.

What is your favourite record ever?

My favourite rap record would have to be “Licensed to Ill” from the Beastie Boys. That was the craziest shit I had ever heard!

How big is your record collection, and do you have some records that you are really proud of owning?

It’s pretty big, probably about 3000 strong. I’d probably say my Parliament and Funkadelic records. They’re cool to kick back and listen to where it all came from.

Any recommendation for an underground release by you that most people probably haven’t heard of yet?

There’s the 707 and 707 The Sequel and Johnny Z’s Hardest Hitters. Check out Tower Records and don’t get me mixed up with the Latin rapper, Jonny Z.

Did you ever work with Khayree? That boy is a legend like you in V-Town rap.

I was cool with Khayree, but we never did any work with each other.

Who is your favourite artist to work with? And who was difficult to handle?

Da Unda Dogg was the easiest to work with. He came in and new exactly what he wanted and knocked it out. The hardest were probably the Looie Crew. They rented out the studio just to party. We never got much work done.

What’s your opinion on the whole Bay Area hyphy style?

Personally I don’t like it that much, I liked the ’95 sound way better. I haven’t heard too much of it. I really don’t even like the word. I’m just trying my own thing and doing what makes me happy.

Is the hyphy thang the main reason why you don’t put out hits like the ones you did back then?

No, I’m just getting’ older, wiser, and always looking in new directions.

Don’t you feel like the customers want the “old” sound back?

I’m sure there’s some more of you die-hards out there. If the vibe is right, it could still happen.

Me and most of the peeps from Germany don’t like the new bay sound, I guess that you pretty much think the same – back then the Bay was on fire, and now went a little bit boring. Even Sick-Wid-It puts out boring cd’s, I dunno – Droop-E seems to get a lot of props in the bay but in Germany the reception is different. Do you think that Bay Area fans have a different “ear” nowadays?

I love the Bay, but I think they were always a little late on their styles. Back in the day we did have a sound, and then we kind of started bitin’ everybody else. We never had any direction. We kind of got lost.

A lot of things have changed musically in my opinion. What is your stance on this? Any critical remarks about the scene nowadays?

Some of these songs I hear on the radio sound like stuff I was making when I first started and didn’t know anything about making beats. They’re very simplistic and have no balls and no soul! It’s sad to hear songs like Laffy Taffy. It’s embarrassing to say I produce Hip Hop.

So we’re at the end of our conversation. Do you have any shout outs for the rap fiends worldwide that are reading the interview? Any other final words?

Thanks Skreel for the major props and support! It’s good to know that there are still true fans out there of the music I was doing 10+ years ago. You germans fans keep me motivated and proud of what I have done. I’m not dead yet, so keep an eye out for your boy!

Ok, thanks a lot for taking the time Johnny! You know we appreciate it!

No, thank you Skreel for keeping the Bay alive from so far away!

‹ DJ Krush – Shinsou: The Message At The Depth