Have you ever been to Germany before? 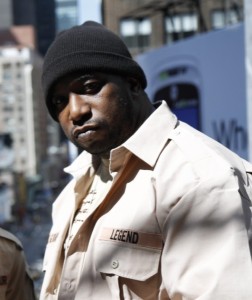 No, I’ve never been to Germany. But I would love to go, I haven’t been on tour overseas in like over ten years now. The only place I’ve been there was London, I’ve been there like two or three times. That was it. I didn’t get a chance to get to Germany yet but I absolutely look forward to doing it in the near future. Hopefully by 2012 I get over there.

Tell me about your new album “Riches, Royalty & Respect”…

It’s a fifteen song LP. One of the tracks I featured on my EP that I released for free download a couple of months ago. It features Havoc of Mobb Deep on the chorus. And one of ‘em I had to drop right towards the end of 2010. It was called “Sad”. I just dropped it. It wasn’t really meant to be a single to the album. It was just me dropping something because I haven’t dropped anything in a long time. So I just wanted to make a little noise when I put that out there. I got a lot of good feedback, people reacted to it. So those were two tracks that were pre-released before the release of the album. But there are thirteen other amazing tracks that weren’t available before. They are amazing tracks, I love ‘em. I feel good about the album and I think people gonna feel the same way.

Why did it take you so long to do another album?

Well, I didn’t wanna just turn out and say anything. I didn’t wanna just build up my album just to do it. I wanted to really have something to say. So I had to wait for the very time and the right inspiration in me to get in the right kind of vibe. And it takes time sometimes because as a artist I really do everything that I do to the maximum. I really don’t like to just throw a project together. Even though there might have been projects that I released where I might have not been as focused as on most of my projects. But this was one I was completely in my zone and it took some time to really get there.

Where do you see your key markets for the album?

Where I’m from: New York, Jersey, Philly, Tri-State area. It’s a different time period now. But I believe I got loyal fans from New York and Philly. That includes Jersey, upstate New York, down to VA, down to the Carolinas, down of course to Chicago. Midwest, Texas, Westcoast, California, Bay Area, LA, you know. These are markets that always sold and always did good. As far as overseas … I get alot of reaction from Germany but it’s so many places now, I can’t even begin to name them all. I even get hit by people from Turkey or Pakistan, it’s really like a worldwide thing. I might not be the dominate force in each of those countries, I might not be the artist of the decade. But I know I have a following in so many different places around the world.

What about the Family Click – you did one album with them, will there be another one?

Everybody just went in different directions. 40 Cal’s going through the states, Ma Barker is doing her thing, Glory Warz is doing his thing. There’s always a possibility of course, we’re all still connected. But at the same time we’re not really working on any projects or anything of that nature. 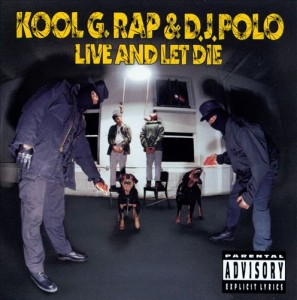 One of my favourite Kool G Rap albums is “Live & Let Die”, so I have to ask you some questions about it. First: What’s the story behind the cover, who’s idea was this?

Oh, that was a photographer by the name of George du Bose. He put the whole concept and everything together for the artwork of the album. And that was an idea that really matched the vibe of the project and I was definitely with it *laughs* The guys on the chairs are just some guys we hired for the photo shoot. They had to play the part of the undercover cops. *laughs*

Tell me about “Two To The Head”, the song with Scarface, Bushwick Bill and Ice Cube. Did they all come over to New York?

The majority of the album was recorded in California because there was a California based producer by the name of Sir Jinx that produced the majority of the album. With exception of “Ill Street Blues” and “On The Run” which Trackmasterz did. But the majority of the album was done in LA. So Bushwick and Scarface happened to come out there and I ran into to them and I told them I’m on another job in the studio. I love them, I love Geto Boys. Period. They had also had love and respect, so they came by the studio and dropped some verses for me. I really love Geto Boys, I really love Ice Cube. They were my favourite groups at that time and still to this day I play Ice Cube and I play Geto Boys.

Back in the 90’s you also worked with some smaller westcoast rappers, like Gooch…

Oh yeah yeah, Gooch was a young cat that I met out there in Cali working on my project. He was very talented and I wanted to help him jumpstart his career, so that’s why I worked with him. Tried to do whatever I could do to get him out there cause I knew he deserved to get heard. I also worked with Def Jef out there. That was another rapper from California that I respected alot. And I still respect him today, he’s a a great person, you know, outside of being Def Jef, he’s a just a real decent human being.

Then Mr. Irocc, Bookie and female rapper Nutmeg, who you also shot a video with…

Absolutely, yeah, Nutmeg was an artist from Arizona. She loved G Rap, she loved what I do and had respect for me. So she invited me to do a collaboration with her on her project. She was a very talented young lady.

Oh yeah, Yukmouth, that’s a wild dude over there on the Cali side! *laughs* He’s another artist that’s right of my alley with the kind of style and stuff that he used to appprach. I mean, it fitted like hand in glove, you know what I mean. 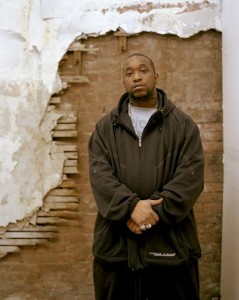 Which one of your albums do you consider the best?

Uhm, it’s really hard to say … I can tell you the album that I really enjoyed building the most. It’s a twosome between “Wanted: Dead Or Alive” and “Roots Of Evil”. “Wanted: Dead Or Alive” because I love working with Large Professor. He’s an amazing producer to work with and just watching him work is entertaining. Because I’ve never seen a producer work the SP-1200 the ways this dude does. He’s just so musically inclined, I mean, even outside the computer-part of producing this dude is just a musician all round the board. I wouldn’t even just limit him to just being a hip hop producer.

What’s coming up next, do you have any plans for the future after the new album?