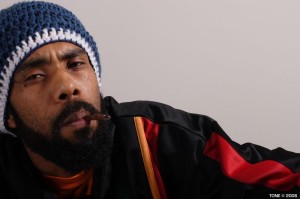 How’s the air over there in New York City?

Peace Germany! The air out here in New York is not too fresh! I mean with all of the city pollution and from the 911 attacks we dealing with alot. Lots of my peeps who lived in the lower Manahattan area or who worked in area’s around the trade center are feeling it right now like my producer and crew member Big Deep he has trouble breathing at times because he lived so close to the trade center, it’s crazy man I can imagine how the air must be out in New Orleans!

The last time I talked to you on the phone was in July 2004 – how has your life changed within these two years?

It changed – I mean I changed labels, personal things in my life, I mean change is good though, what I can say now is that I have a new record out, “Cuts & Colabos Part 2″, the follow up to part 1 out on Raptivism Records and the next album is dropping in September on the french label Ascetic Music. See asceticmusic.com So it’s been a lot of grinding since the last time we spoke also I’m a part of a new crew Creative Juices! Check out creativejuicesmusic.com we are a crew of artists – producers, emcees, graff writers etc. All together for one common cause to elevate this culture.

You already mentioned it: the second part of “Cuts & Collabos” has been released few day ago. Time to make some advertising…

Yes, yes everyone out in Germany, fuck it Scandonavia – please buy it *laughs* It’s dope, it features some dope emcees like Immortal Technique, Vast Aire, Masai Bey, U.G. of the Dwellas, it’s just a dope piece of work and if you got part 1 you need part two in your collection!

I mean it’s an outlet for my music to get to more people then just me calling internet sites, stores and hustling on the street. Raptivism made it happen on a distribution level so now it’s basicly everywhere I mean a few places we still need to get it to but we working on getting past all of the obstacles! Y’all know who you are stop frontin!

Have you met new, interesting people there?

Indie Labels nowadays are more distribution then a label, so it’s not like I really interact with alot of the artists that have projects on Raptivism. The artists who Raptivism have worked with this year like Masai Bey and Infinito those are my peeps just from this indenpendent movement. I’m on Infinito’s album on the track “State of the World” with Mr.Skurge. To tell you the truth I meet more interesting people on the road and online. Like shout out to Elite Fleet in Sweden, I have almost finished a whole album with swedish producer Big Ape from the camp Elite Fleet – check out elitefleethiphop.com Also shout out to the Snowgoons. Yo
Illegal, still waiting to hear my track holla!

Of course everybody is waiting for a new album – so what can you tell us about your next projects?

Yo I have like three coming after this one. First up “Longevity Vol. 1.5″ out on Ascetic music in France, that is my full length dropping exclusively overseas and the u.k. first! It features Iomos Marad, Apani, U.G. of the Dwellas, production my Black Panther, Ste-Lo, Spier 1200, Gran Fortune and french producer Dysh plus more. It’s a dope album, it’s been kind of sitting around for like 3 years. After that will come “Big Ape & L.I.F.E. Long are Crossing The Globe” – no home as of yet were still finishing the project. That is an album entirely produced by swedish producer Big Ape of the Elite Fleet – check Elitefleethiphop.com! So far we’re 9 songs deep and it features songs already recorded with Rise, Breez Evahflowin, Swave Sevah, Shabaam Sahdeeq, Prince Po, U.G. of the Dwellas, Creative Juices Emcees Ide and Alucard. It’s a crazy album man! Then after that another album produced by my production team 2 Hungry Bros Ben and Deep, no features to be announced as of yet were working right now but we got like 8 songs recorded so far for that production it’s coming out real hot. Alot more things in the works check out creativejuicesmusic.com for more info. 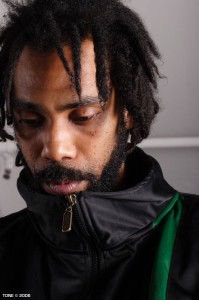 Which mood do you want to transport through your music?

Just life in general basicly. My music is made for the average person to relate to. I try and paint scenes for people or just do some classic Hip-hop shit!

Are there any other projects with your participation, what do we have to look out for?

Look out for me on High Priest from Anti-Pop Consortium’s solo album dropping on Sound Ink this summer, Rick Whisper’s new album dropping real soon. Mad mixtapes, I’m on the “We R Compilation” that Uncommon Records put out – shout out to Nasa and Cirrus! The Snow Goons compilation, Creative Juices presents The Creative Masters Compilation, C-Rayz’s next album. Yo I’m on alot of things this summer and for the fall – too much ganja smoke for me to remember right now! *laughs*

I spoke to C-Rayz Walz last summer and asked him about Stronghold – the
crew you’re also a part of. That’s what he answered: “Stronghold – bunch of lazy motherfuckers right now / Maybe one day we could really put it down for the world / People always ask me it’s no denying / And I always be on some bullshit, lying / Like ‘yo, the album is coming in a minute or more’ / But that’s a motherfuckin lie we ain’t seen the studio door”
What do you think?

C-Rayz is funny man! He’s my brother and also a comedian, the fans know we ain’t lazy cause each member of Stronghold is on something right now or has a solo effort about to drop. As far as us doing a crew project no one has really offered us anything worth us putting out an album together, I mean look at the crew! C-Rayz, myself, Poison Pen, Immortal Technique, Stelf Index, Swave Sevah, Big Mike, D.J. Static, Breez Evahflowin, Billy Grahm – it’s some of the most talented emcees in the game right now we gotta get offered something nice to give yall this album. We have recorded a few songs as a crew but I mean the solo projects and features is how we eating right now so as soon as someone steps up and say’s we’ll put out this album the people will have it. So it ain’t a myth of us putting something out the people gotta work with us and it’s alot of us so it gotta make sence when yall approach us!!! C-Rayz Walz is a comedian! STRONGHOLD FOREVER!

One thing I’ve been thinking about lately is that New York loses more and more listeners to the southern and midwestern scene. As a rapper from New York, do you experience any negative effects of this landslide?

Oh yeah!. New York has always had there own sound! I mean we started this shit! Only thing is now we are looking for the easy way to be heard. So we feed off everyone else and that is why midwest and the south is doing much better because there doing what they do. We’re trying to do everything right now and not just be that grimy, gritty New York that’s the problem, we have lost our identity out here we gotta bring that New York sound back!

Let’s take a brief look at L.I.F.E. Long, the person behind the music. Are you rather an introvert or an extrovert?

Definately extrovert, I’m a people person, I love to build and meet new people man that is what life is all about finding out new things and building!

Your favourite place to hang out?

The studio! I love recording. Music is my life, the vibe in the studio, any studio, is always magical coming in with an idea and leaving with a finished product! I love the studio catch me usually in the Creative Juices Mansion recording that heat… 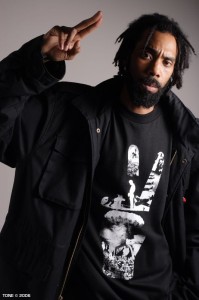 How do you work up dissapointments?

To tell you the truth: life is a balance. I think positive but leave room for negative occurances so I just try to maintain. I mean things can let you down for a minute but you gotta pick yourself up! I give thanks to the Most High for giving me balance and helping me to maintain! Haille I Selassie The First! RastafarI! God truly lives!

The funniest thing that happened last week was at a performance I did at the legendary New Yorican Poet’s Cafe out here in N.Y. So my man Ide of Creative Juices was performing with me he was doing one of his solo songs and I was backing him up, he has a line where he say’s “shitting on these assholes” – so I turned to the crowd and squatted like if I was taking a shit. Ide lost his mind and just started laughing it was hillarious we alway’s have a great time performing shout out to Creative Juices! *laughs*

To dissolve writer’s block, it helps to…?

To tell you the truth you can ask anybody I know – I never have that problem. I can write on the drop of a dime! The only time I have problems sometimes is with solo songs but I don’t have that problem, I don’t know maybe go burn a spliff or something! *laughs*

To me, you’re a very open-minded artist that tries to keep in contact with his fans – are there any experiences with fans that really impressed or even astonished you?

Yo to tell you the truth I have met a lot of cool people. Fans are always doing some next level stuff. *laughs* I’m just always impressed by the knowledge of my music that the fans have so just knowing that cats know me from this record or heard me on that radio show or even knew that it was me in El-P’s 9mm video – that just impresses me. Nuff respect to all my supporters out there! Give thanks!

Where do you see your career going in the long-term?

I don’t think I’m gonna be rhyming professionally forever but definately I’ll be still in the game but on some behind the scenes shit. I want to manage, and run my own label one of these days!!!

You forgot to ask about how great “Cuts & Colabos” is! It’s really dope man you got to buy it. Check out raptivismrecords.com and creativejuicesmusic.com for more info…

Last not least it’s about time to give some shoutouts!

Shout out to Jah, give thanks for everything! RastafarI!Jah guide all my peoples in the struggle. Peace to Stronghold, Creative Juices (Hungry Bros Ben & Deep, Ide, Alucard, Getty Free, Proper, Savage Messiah a.k.a. Daddy Grace – check out creativejuicesmusic.com!). Black Panther, Rhymulos Starr, Neurologist, Respect the god of the Perverted Monks, Big Ape and Elite Fleet out in Sweden plus Sneaker Sandy, the colony out in London, my man Jan in Berlin, Stolen Music Crew, Critical & Madness, U.G., Prince Po, Rise, Shabaam, all my peeps. My myspace junkies, Impress Tru, Crown A Thornz in Canada! Big things coming this year y’all stay tuned!

New Breed Of Hu$tlas – Streets Got Me Gone ›