How you doin’ Ozwald? Could you introduce yourself to peoples in germany who don’t know you?

Yea, what up… I’m a rapper / producer from West Hartford, CT but been doing my thing in NYC for a minute now. 2 albums out, working on the third and just building. 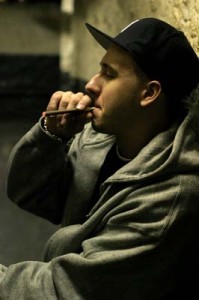 Is there any special meaning behind your name?

Nah, not really. It’s just a name I’ve always liked. When you’re born you don’t get to pick your name… you’re given one. At the time I chose the name for myself, a lot of rappers were naming themselves after adjectives and random words from the dictionary… shit like that. I wanted something simple and kinda catchy… nothing too complicated ya feel me?

When did you start rappin and what were your major influences back then?

Man… I started rapping since I was a little ass kid, I don’t even remember how old but I remember the first time I ever heard rap I was in the car with my pops… I must have been like 4 or 5… mad young. He turned the radio up and he was like check this out… this is hip-hop. That was the first time I ever heard it and I bugged out. I loved it. Then, when I hit the first grade, Naughty by Nature had just dropped the OPP shit and that was my favorite album ever. I used to listen to that album over and over. That’s around the time I started writing rhymes… when I was like in first grade… I can’t imagine it was anything too special but I was excited to be putting words on paper. I also remember I had this little bullshit record player and a few nursery school vinyls like the chipmunks and shit… I would try to scratch ‘em like I heard in other rap songs. It was a record player though… not a turntable… so all I really did was fuck up the records and put scratches all over them. Fuck it.

You founded your own label Hands Down Productions at the age of 18. Why didn’t you just sign to another label with a good distribution that could you give a better chance to release ya albums?

Well, coming into this game I didn’t realize most of the business aspects. Ultimately my goal is to put out good music, but it’s still a business and just as in any job, you got to get paid. But what I figured is if I could own all the publishing to my songs, I’d make a lot more money than if someone else owned my music and I only got points/percentages. It never made sense to me why I should bust my ass and make someone else more money. So in theory, it’s a sound idea, but it takes dough to make bread; which is what I’m working on now. But with this new album, which I feel is definitely going to be my strongest yet, I really have to pick up a distribution deal if I’m gonna move units the way I feel I can. Thankfully, I’ve been in contact with some people already so we’ll see what happens.

Recently you signed two young and upcoming artists, Legend and Monty Hall. What can you tell us ’bout them? Are they goin’ to release some solo stuff?

I would like to tell you yes… but right now Legend has been up in Syracuse since we did that one joint on my website, and Monty is doin’ his thing in Albany right now as well. It’s tough to keep people around while building HDP, but I’ll always try to help promote these dudes and work with them whenever possible… both are extremely talented.

Do you plan to sign some other artists in the near future or is the HDP team perfect?

Right now I’m focusing most on building my own career. But as time goes on and I have more resources, I want to make a strong team… a real force in the game. If you look at how Jay-Z and Dame Dash did it, Jay was the only artist on their label when he first came out, but as he got established… the Roc became huge. Now look how powerful their label is and all the artists they got… In time, that’s where that’s where I see Hands Down. 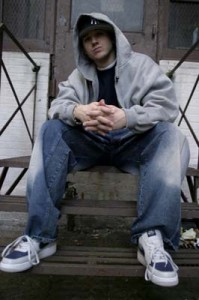 At the age of 21 you already released 2 EPs so far. Where do you see yourself in the next 5 years?

I told my-self coming into this game it was gonna take me 4 albums to really get on. And what I mean by that is to have my name ring bells everywhere. I’m a firm believer that if you bust your ass and pay your dues you’ll get what’s yours no matter what it is your trying to accomplish. So in 5 years I see myself on-top. If I didn’t see myself on top… then I honestly got no business doing this shit in the first place. But this next album I’m gonna be dropping is about to hit people hard so hopefully it only takes 3 instead of 4 ya feel me?

Can we expect a full-length album this year?

Yea no doubt, this is definitely a full length album. We’re also pressin’ vinyls for this one so all you DJ’s need to holler at us and we’ll get you some promo shit.

You also do the productions by yourself. Which eqipment do you use and what do you think, how should a good beat sound like?

Yea I make all the beats myself. I won’t tell you all the equipment I use, (you know I got my secret weapons!) but for the Hungry as Hell album, I did the whole joint on the mpc2000xl. To all you producers, go and cop that shit if you aint got one. In terms of what I think is a hot beat? As long as it’s got my head bangin then it’s official. Feel me?

Do you also produce some non – HDP artists? Are there some artists out there you would like to do a collabo with?

Yea I’ve done a little production for other cats but not much at all. My problem is I’m selfish… I make a hot beat and I never wanna let it go. I always think that it’s some shit that I have to have on my album which is weird though cuz I got hundreds of beats and I’ve only released like 18 songs or some shit. So go figure. But I will tell you that my best beats are gonna be on my new shit. So get ready people! As for who I would like to do a collabo with? I guess I’d have to say my first picks would be Jadakiss, Styles P, Fat Joe, Nas… I guess there’s more than a few, but there’s a lot of people in the game I would like to work with… hopefully the opportunity comes where I get to.

What do you think, how have you improved during the time between “Dead Or Alive” and “Hungry As Hell”?

HAHA… yo that first album got a good response but I laugh when I hear it. I’m rappin about some really random shit on some tracks. After it came out though I learned a lot from it. When I put it out initially I didn’t really understand how to make songs or even how many bars there were supposed to be to a verse. I just went to the studio kinda ignorant and recorded it. The Hungry as Hell joint, however, I’m happy with. I fixed a lot of things I did wrong since the Dead or Alive album, but in my own opinion, Hungry as Hell was much stronger than my first time around. I guess I look at the Dead or Alive album as a rough draft. When I started writing for my next one it had been almost 2 years later… so I had grown a lot as a person and as an artist and definitely had more shit to rap about. All I can ask for is that when I’m done recording my new shit, I see the same kind of improvement I made between my other two. 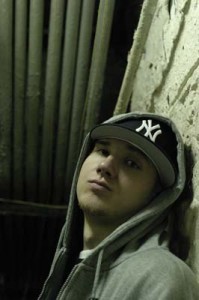 How would describe your style?

I keep the cap twisted / the brim right below of the brow / it’s my style, I’m just showin’ you how. Got it?

Who is currently the most underrated rapper in your opinion at the time?

I think one of the most underrated rappers, who is finally getting the credit he deserves is Fat Joe. I been a Fat Joe fan for a long ass time. I think he is… and always has been, one of the best rappers in the game. I also love M.O.P. To me, Firing Squad is one of the illest albums out there. If you don’t have that shit go and cop that shit. And while you’re at it pick up Jealous One’s Envy too by Fat Joe. That’s real dope too. And while you’re still at it, go and buy my shit as well. Like 3 or 4 of them joints.

What is your motivation that keeps you going on every day?

It’s kinda simple. I really love music and I love making it. I can’t see myself doing anything else… and I really don’t want to. I’m not a 9 to 5 type of cat.

If you get the chance would you come for a tour to germany?

Hell yea. I’ve never been. My bro has been there a few times and my parents lived in Munich for like 3 years back in the day. I just don’t like flying but I would definitely go there especially for a tour.

Yea, thanks to my whole fam, all my people in WeHa and NYC, all the supporters and the haters (I love them too)… And big ups to the German cats who are holding me down.