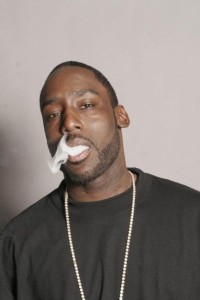 First things first: how did you start rapping?

I started in the pen. I went to jail and a lot of people was doing it, beating on their chests – and I learned by just messing around. I would classify my style rough, with a hard demeanor. Gangsta rap, real life street shit. My first CD was with Thugged Out, the progress was off the chain. We are the number 1 group out of the midwest region and I’m the number one solo artist. Thugged Out sold over 100.000 independently and me as a solo artist… the numbers are still counting.

Life in Gary is real crazy we are the murder capital. I just lost my brother out here in these streets. Half of the murders that occur in Gary mainly happen on 5th ave. What ever you do comes back around on you.

What is going through your mind before you get into the studio?

To murder tracks. Ever since my brother died, I been murdering shit. The struggle, being heard, just getting to the next punchline saying they going to love this shit. All of my songs are personal. They define me, especially my poetry. I’m inspired by Tupac, my brother Mafioso, Jezzy, Kanye, T.I. and Lil Wayne. “King Back” ist still one of my favourite songs because it really tells my struggle. That’s that Gary shit: very gangsta! Why? Because everybody wants to be a killa!

What are your thoughts on the rapscene in and outside of Gary?

Alot of people really don’t have a struggle or something to talk about. But if they do, I’m listening. Gary is going to be real big and its going to start with me. I can be bigger than New York myself, its all in the mind. I want to work with everybody, I want my talent in everybody’s ear drums. I could imagine to work with Kanye, T.I, Jeezy, Young Joc, Michael Jackson, R.Kelly, Twista… I got a long list!

Whose the most promising upcoming artist from your area? 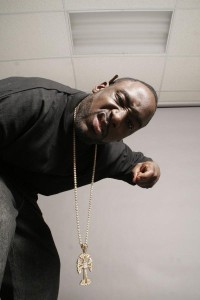 Me. Not to brag or promote myself but – ME! No giggle!

What about “I Refuse 2 Lose”- who did the production and who’s featured on it?

KrisStyles, J-Trks, Bob Ware, Finga Roll. The only feature I got on this EP is my twin brother Bullet Boy on “Fresh”.

Do you have even more records in the pipeline?

My album drops in Febuary, I got a mixtape dropping in November called “Icing On The Cake”. We are working on “The Thugged Out 4eva” DVD and album and also a hood compilation called “WD40″.

Is there anything left to say?

Thanks to God – if God wasn’t in my life right now, I wouldn’t have made it this far in life or my career. Thanks to you for the interview, WD40 Movement, James Dye of BodyDoc Management, Bullet Boy, Mafioso (Rest in Peace!), Budd Loc, my kids, The Goldsby Family, my nigga Kool Ken, J Trks, KrisStyles, Bob Ware, Finga Roll, DJ Dnell, 5th Block, B-Street, Gary, Indiana, The Midwest region, the whole world!