Your last album “Tearz Of Da Son” even found some fans over here in Europe – are you content with the reception of the record?

Yea. I’ve been real blessed. In the states, especially the Midwest, the buzz is tremendous. I’m also getting CRAZY love from overseas in Europe, Asia, and even Australia. Shit I’m finishing up a song I’m doing with a group out of Germany. Hip Hop has taken over the world and I’m lovin it! I know rappers who have albums and mixtapes that haven’t even left the hood, and I’m getting love worldwide! It’s truly a blessing. 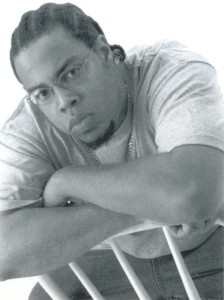 How would you classify your style?

HARD & DEEP! Emotional, motivational street music! I spark a fire under niggaz asses! That’s what I bring to the table. Straight passion! And since I’m from the midwest, I’m not just east coast, west coast or down south. I’m all of the above. That’s why it’s hard to put me and other artists like Twista or Kanye West in a box and label it this or that, because we represent everything.

You released some less-known underground-albums before you did “Written In Blood”. Could you just give up some information about these releases? Are they still available?

How do you comment your own developement as a song writer and rapper? Is there still anything you want to improve?

It’s crazy how much I’ve grown. Sometimes I take all the albums I’ve ever done, throw them in the Cd changer and just press play. But at the same time, I am my worst critic. I’m a perfectionist so I see a lot of room for improvement. Since I’m only 23, I’ve still got alot to learn. It’s almost impossible to not get better because everyday I learn something new that makes me a better man. Right now I’m focused on my delivery. Some rappers are behind the beat, some rappers are on top of the beat, but I want to be inside it. When it’s all said and done, I want to be remembered as the best lyricist and songwriter that ever touched the mic. I’m dead serious and I’ll do whatever it takes to make that dream a reality!

What’s coming up in the future? Are you already back in the studio for another album?

I’m already working on my next album. We’re looking to release it in 2006. In the meantime I’m releasing a couple mixtapes so my fans got some new shit to bump. I’ve already done close to 30 songs. So be on the lookout for that Guntalk mixtape this fall.

If you had the free choice: which artist would you like to work with on your next album?

Nas, Twista, Bizzy Bone and Scarface. Alot of niggaz put whoever’s hot at that time on a record. Fuck dat! I put legendary rappers on my shit. Niggaz that changed the game. Think about it. Every rapper I named is a musical genious. That’s why I want to work with em. Not because they got a hot record on the radio.

What about the featured artists that could be heard on your albums – will they release any solo material?

3AM got an album out now and they’re working on their next project. I’m not too sure what everybody else is doing.

You moved to the eastcoast as a kid. How has the time in New York influenced your life?

It was New Jersey. I moved to Jersey when I was 9 and moved back when I was 16. The seven years I spent out there was the best thing for me. Hip Hop was huge. I was performing at the age of 10. If you look on the inside cover of Tearz of da Son, you’ll see a picture of my first performance. I was only 10 but I was writing my own lyrics and everthing. By the age of 12 I was battlin niggaz at block parties. A couple years later Profit was born.

What are the main differences between life in NYC and Kansas?

Speed. It’s much slower out here in KCMO (Kansas City, Missouri) In Jersey, New york is only a 10 minute train ride away. The ocean is right next door. Jump on the highway and you got Atlantic City to the south and Philadelphia to the west. So we were always doing something. Not out here. Believe it or not, Kansas city niggaz is shootin shit the fuck up. But this where I was born. This is home.

You finally ended up in Kansas, the city was hyped alot within the last few years – Murder Dog Magazine released a special KC-album for example – what’s your opinion about the rap scene in town?

The rap scene is ugly. Niggaz is cuttin each other’s throats for shows. Driveby’s are up 128% so clubs are scared to book rap shows. The radio won’t play local music due to politics. It’s hard to move units. There’s only a handful of niggaz really doing their thing out here. Everybody else is at a standstill. But at the sametime the market is wide open! So at any given anybody can blow.

Who has the potential to achieve a commercial break through?

Honestly, we are all one hit away from making it. Even the shitty rappers are one hit away. All it takes is one song.

I think it’s obvious that rapmusic has changed/influenced the public view of street life in america. But: in a positive or negative way?

That’s a good question. The ghetto has been fucked up long before rap music existed. Rap music is like the CNN of the streets. Now, since rap is as big as it is you just hear more about it. 80% of hip hop fans are white. Without rap music, how many of that 80% would know shit about the hood. Bottomline, positive things do happen in the ghetto but most of the time all you see is negative shit. Every other corner there’s a liqour store, abandoned houses, and niggaz slanging shit. Sad but true. Once you change the quality of life for those living in poverty, we’ll start rapping more positive. You can’t blame the messenger, you can only blame the source.

… song/album of all times:
I can’t name just one album: 2pac and Biggie’ s last albums, Nas – It Was written, Twista – Adrenaline Rush

… line I ever wrote:
I couldn’t even begin to name my favorite line but if I had to pick 2:

… time of my life:
Best time in my life…When I was in high school, I was hustlin hard and I stacked enough bread to fly me and my girl out to Florida. The hotel looked at me crazy when I paid for a week stay on the an ocean front resort in CASH!

… idea I ever made come true:
My whole life right now is a dream come true. Right now I’m living a dream. I wanted to put out music and make a living off that… I am. I just bought me a house.How real is that? And I still own my masters!
“What you don’t remember me/ the one you said would never make in this industry/ never mind that I made it independently/ and all that changed was the face of my enemies”

Any last words to the people of the world?

I just wanna thank the fans for the love. My fans are real. No video, no radio exposure, just good music and they respect me for that. Be on the look out for Guntalk Vol. 1, dahoodknowwhatitis Vol. 1 and my new album in 2006. I’m just getting started!