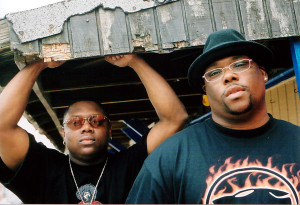 First things first – could you just introduce yourself? Who’s in the group, where do you come from and what records have you released so far?

Kneel Knaris: Introducing the world to PX (Parts Unknown) is easy. It’s Kneel Knaris, BlankMan and LB. Me and BlankMan are MCs and LB is our producer. Shouts to DJ Face and Easy Tee in the building as well. We are Street Legal Entertainment. We come from Baltimore, Maryland – but to the rest of the hip hop world it’s Parts Unknown until we change that!! We have released several singles and a full length that gave the world a taste of more to come.

How did you come up with that name ‘PX – Parts Unknown’?

BlankMan: From the second time we recorded together we realized that the chemistry was crazy. We all come from former situations (groups) that didn’t work out for one reason or another, so when we decided to form a collective we all know that Baltimore was the undiscovered continent of hiphop – so that’s how we came up with Parts Unknown. We have also all travelled the world and bring a world view with our music. We added the abbreviation “PX” for short. P is for Parts and everyone knows that X is the variable for Unknown!

The first time I really recognized you was on a mixtape from Real On Purpose Entertainment where they presented something like a cross-section of B-More’s rapscene. What are your thoughts on the flourishing scene in your area?

Kneel Knaris: Man, Baltimore’s scene has always existed. It’s like everywhere you go people all seem to have this preconceived notion of Baltimore. Lots of artists borrow pieces of Baltimore’s culture and adopt it into themselves. What do Tupac, Jay Z, DMX, and the Notorious B.I.G. all have in common? Besides being the greatest at what they do they have all spent considerable time in Baltimore, Maryland and D.C. We rep that too. It’s time we share of ourselves what so many have borrowed from us!!

Talking about the mixtape scene – how do you rate this development? Is it rather useful than derogating in view of the musical quality?

BlankMan: I like mixtapes for what they do – they expose the public to another side of music that radio does not. It is very helpful and great for exposure to areas that are underserved or underrepresented in hip hop.

How would you characterize your style?

BlankMan: Can’t classify or put a label on greatness and genius. What we do naturally others have to try to imitate and mimic. We can do what they do but it doesn’t work the other way around!

What differs you from the rest of the ascending peeps on the local level?

Kneel Knaris: Nothing – we are all in the same struggle trying to bring Baltimore to the forefront where it deserves to be! If you are asking what we bring to the table artistically, we are the definition of hip hop, not rap. We spit about struggle from many perspectives. We are just as corporate as we are hood. We have mastered walking both sides of life very well. 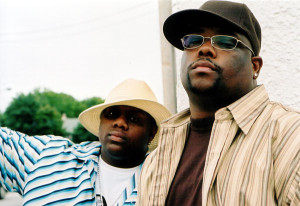 If I got it right, Blankman is also working with a local jazz/R’n’B group – could you just give up some information on this sideline-job?

BlankMan: It’s like some James Bond double agent type shit – if we tell you, well you know the rest……..

Your latest single “Make u Famous” has been released not long ago. What do you offer on this piece?

BlankMan: This is a joint that we especially like. It gives us a chance to party and change the pace a little. Everyone is so serious and angry it concerns me. We wanted to take a small intermission to get our drink, smoke and party on. We can continue with the struggle a little later on… Everyone’s so set on the United States Ghetto its time to remember that hip hop started out as one big ass party!!!

So you obviously like to party – how does a good party got to have that you enjoy the stay?

I think you should keep up the buzz – what about a full lenght album? Are you already working on it?

Kneel Knaris: To be continued… We record daily – it’s not a matter of if, it’s definately a WHEN question!!!

You toured the Far East – tell me about your impressions…

BlankMan: Man the hip hop scene in Asia is crazy!!! It was all night parties and the DJs were killing their sets. Man we haven’t partied the same since then. America we need to step our party game up! 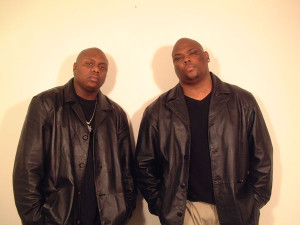 How did this tour come together?

Kneel Knaris: A DJ/Promoter from China heard about us through a mutual friend and they liked what they heard. They started spinning material in the clubs and the response was crazy. Promoter contacted sponsor, sponsor drew up papers and the rest is African American history! The next one is in the works now.

Is there a bigger market for your music abroad than in your homeland? Where do you set your focus on?

Kneel Knaris: The world is not enough if you ask me! I’m trying to rock a show on Mars!!! I’ll rock a show in Antarctica for penguins if they was paying and they wanted hip hop!!!

Do you have any concrete plans, which countries would you like to travel?

Kneel Knaris: Again, I repeat, THE WORLD IS NOT ENOUGH! We will rock anywhere they have two turntables, two mics, Guinness and WOMEN!!

Do you have any other hobbies besides making music?

Kneel Knaris: Making Babies, nah just kidding! This isn’t a hobby! This shit is not for the faint of heart! Ask a 12 year old kid is this a hobby? This is a profession and we are professionals – it stopped being a hobby when we started getting paid!

What can we expect from PX in the future – could you give us a little forecast?

BlankMan: More than we can explain right now – we are gonna need a follow up interview in like a few months because even then many new things will be set in motion! Look forward to the holla follow up!

Thank you very much for taking the time to do this interview. If you still have anything to say – drop it now!

BlankMan: We are up for tours, have your people call my people and they can collaborate and make it happen. PX at a BAR, PUB, CLUB or ARENA NEAR
YOU!!!!!!!!!

This interview was for and behalf of FJ Entertainment Inc. (www.fjentertainment.com)