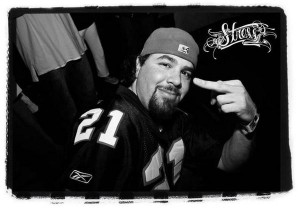 Aiyo Skammadix, for those who don’t know, introduce a bit yourself, your come up to hiphop and anything you feel important.

What’s good y’all. I’m a sample based producer raised on the Golden Era of Hip-Hop. I do my best to represent that in my music. I started out playing a variety of instruments in a bunch of different types of bands, but Hip-Hop was always my one true love. I started making beats with an Alesis Drum Machine, a Guitar, and a Tascam 4-track back in the day, then I stepped up to the Yamaha QY-70. I then moved on to Reason when it came out and started working heavily with samples in it. I then made the switch to hardware and currently use a Roland MV-8800 to beat up vinyls.

Your hometown is Long Beach, New York. How does the scene look like there, how would you describe it?

There really isn’t a scene here. The one really notable thing in Hip-Hop that happened here was Public Enemy shooting the “Welcome to the Terrordome” video here. That was pretty ill. The scene here used to be dope though. KMD pretty much came out of Long Beach, but now, there really isn’t anything going on. No shows, no artists really on the come up.

Your relationship with Outerspace is pretty strong. How did the friendship with them come together?

I have to give props to the homie TZR on that one. I remember when I first started getting back into beatmaking that he sent out a bulletin on Myspace from the Q-Demented profile that cats were looking for beats. I didn’t really have a catalog back then. Once I built up the catalog, I got at him and asked him if cats still needed beats. He told me to get some joints in, I did, he passed them on, and OS was feeling some of the beats. It all took off from there. Shout outs to Crypt and Planet. Those are my brothers for real. Props to TZR for the alley oop. That was really a huge stepping stone in my career because it led to me working with a lot of the Philly Hip-Hop artists.

The song “Our Father” is very deep. Explain your own feelings about that one…

Man, I could go on all day about this song. The beat for that was the first beat I made after my Grandmother passed. I was in a pretty big rut beat wise before that. I just found that sample and was like… “This is exactly how I feel right now.” So I threw it together and sent it off to OS. Planet hit me back almost immediately and said they wanted to use it. I had no idea what direction they were going to go with it, but when I finally heard the song, I was really speechless and proud of it. Both of their verses really describe how almost everyone has felt at one point. It’s definitely one of those joints that everyone can relate too and Lawrence Arnell really killed the hook. 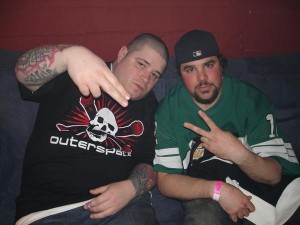 You had a big part at “The Ritual Of Battle” album from AOTP. “Through Blood By
Thunder” is a very brutal one. What influenced you to make this one?

I didn’t really have an influence when it came to it. It was just a dope sample, and when AOTP was looking for beats, that was one of the many I sent in. I was actually able to be in the studio for the recording of the track. It was a great experience. Nightwalker and I went down to Philly and got drunk on the Chinatown Bus on the way there. We got to the studio and pretty much all of AOTP was there. I got to build with all of them, and it was a great experience. The only thing not so great was that there was so many cats in the lab that it was just hot as fuck *laughs*. People were sweating just from breathing. Overall though, it was dope.

And then you worked with Sabac Red of Non Phixion. Tell the story how you connected with him and what is like to work with him?

Another case of someone that I work with hooking me up with another artist that I admire. Mr. Beatz (cop that “Spit Therapy” album if you haven’t already!) was working on Sabac’s website and mentioned me to him. He told Beatz to give him his email address and for me to send him some joints. I sent him a few and the rest is history. It was great to be a part of that project. Being a Non-Phixion fan from the beginning, it was an eye opening experience to work with Sabac. Getting 4 joints on his album showed me that I could really do something with my music.

Is this hip hop thing a full-time activity for you, or just more of a hobby?

Good question… Can I call it a full time hobby? I’m not really making a living off of music, but it’s something I enjoy doing. I make music that I love with artists that I respect. It’s definitely fulfilling.

Do you plan to put out a full-length solo album?

Eventually. I’ve been putting aside beats as I make them for a couple of projects. I’m going to eventually release a Beat Tape, and I’m going to get started on a producer album. I know a lot of artists and I’ve already spoken to a bunch of them about it. It’s just the logistics of something like that are pretty tough. I would assume the usual suspects will be on it, and there’s still some people I need to get into contact with, but I’m hoping to get it started really soon.

Right now I’m concentrating on producing the next Day Laborers album in its entirety, and I’m also producing an entire album for Nightwalker. They’re both going to be really dope projects. The DL’s have started beat selection and Nightwalker already has all of his picked out. There’s going to be a ton of guests on the Nightwalker project. It should be really interesting. I’m also going to be working with Mr. Beatz on the follow up album to “Spit Therapy”. I have a beat going on the Ill Bill/Paz “Heavy Metal Kings” album, and OS has recorded quite a few joints over my beats. I’m not sure how many are going to make “My Brother’s Keeper”, but I’m sure I’ll have at least one going on there. I’m also working with M-Dot and EMS. We’re going to be putting a lot of work in. Also, The Banga Brothers Vol. 2 album should be coming out soon. There’s a bunch
of work I did on that album with a ton of Boston artists. M-Dot and EMS, Dickie Skins, Millyz, Chilla, Ge-Ko, and a few more. I’m also working on the “Pills and Liquor” mixtape from The Camp. T-Banga, who did a lot for me as far as getting me in contact with artists in Boston, recently passed away. It was a huge shock. R.I.P. homie. You’ll be missed. So, in short, I’m keeping busy and plan to keep on going no matter how frustrating the industry can be at times.

Any last messages/thoughts to the readers?

Yeah. BUY QUALITY MUSIC. Your favorite artists can only keep doing this if you actually support them. Buy their albums. Go to their shows. The fans fuel their ability to do what they’re doing. I know how it is in this day and age when albums are leaking months in advance and they’re easily available for download, but if you like it, show the artists a little love and go out and cop it. I’m sure y’all have been beaten over the head with all of that a million and one times, but it’s important. Shouts to the Enemy Soil family, Mr. Beatz, The Day Laborers, M-Dot, Revalation of EMS, Nightwalker, Diabolic, and everyone else who pushes me to get better at what I do.