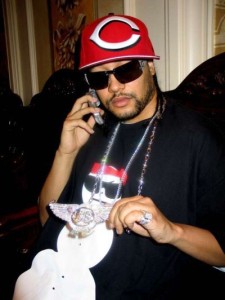 You’re in New York right now, what are you doing there?

I’m just finishing up my mixtape and my album. But as you know, I’m not living in New York, I’m from San Francisco, California, the Bay Area.

You’ve done a song with Juelz Santana and Jim Jones – how did you experience the work with the Dipset Family?

Working with them was very professional. The song is called “Real Talk”, we did it a little while ago. It’s me and Juelz Santana, Jim Jones is doing the intro and the outro. We recorded it in Jim Jones’ house in Miami. The song is hot, it’s crack music. It’s a hustler’s anthem.

Let’s talk aout your announced album “Every Penny Counts” – what can we expect from this record?

You can expect a new and improved Sky Balla. I improved the flow, the beats, everything. You can expect reality rap, hustler music, street music, rock music. I rap about the trials and tribulations, the struggles and the reality of growing up in the streets of San Francisco, California. I rap about gettin’ money and what I do once I get it and how much I love it. As far as the beats, I have my in-house producer Cosmo, Shawty Red, Hi-Tek, Dangerous LLC and also my man Amadeus. As far as features, so far I have Juelz Santana, Fabolous, The Game, San Quinn, Messy Marv, E-40, all the Bay Area rappers. I have a few special guests on there, too, that I can’t name yet because we’re still in the process of getting the papers all done. Right before I’ll drop a mixtape entitled “Lifestyles Of The Hoodrich And Famous”, hosted by DJ Sycamore.

I heard people sayin’ that you bought you’re way into the game – what do you answer them?

My respect bought my way into the game. Alot of people respect and know that I had money before I got into the game. It takes money to make money! I got my money from the streets, so I’m reppin’ money that I have and generate more money. I pay for certain things and alot of people aren’t financial established or capable of spending the amount of money that I spend on my independent project. 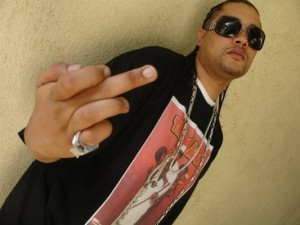 Do you have alot of haters?

I mean, as long as you’re doing something good and positive there’s always gon’ be a hater somewhere. But it wasn’t for the haters, there wouldn’t be no fuel to the fire to keep you motivated and keep you pushing to do better and better and strive for perfection. That’s what the haters are there for, they’re fuel to the fire. If somebody is hating on me, that means I’m doing something good. When people stop hating on me, that’s when I know I’m not doing something right. You understand?

What about your expectations? Will this album be your international breakthrough?

Yes, this will definately be my international breakthrough. Worldwide music, it’s a worldwide album! Definately. It’s bigger than the last album I did. I only pressed up 2.000 copies of “Mobb Report” – but it got me so much exposure nationally and internationally. And the record wasn’t even distributed state to state nationwide,
it was only distributed throughout my community and my region. And this album right here will definately have major nationwide and worldwide distribution.

What’s your opinion about the Hyphy movement? 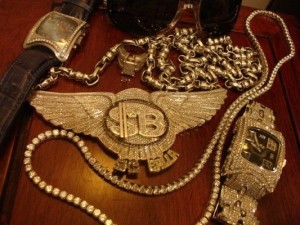 Will do any Hyphy music yourself?

Hyphy is really how you’re feeling at the time so I let the public pick the songs that they feel that they wanna go hyphy to. So I don’t just go into the studio and say “Okay, this is a Hyphy record” – I just do me! And then, whatever the public feels is the hyphy record, that’s the hyphy record, ’cause it makes them go hyphy. I do have music on my album that’s definately gonna get the streets hyphy!

How come that you were featured on the Bay Bridges Compilation?

E-40 put that compilation out, he’s a good friend of mine for alot of years. And he reached out to me, he was like ‘Young homey, do you got a song for me?’ And I said ‘Of course big homey, you know I got a song for you. You’re the embassador of the Bay and I’m the prince of the Bay!’

What’s going on with the Gamblaz lately?

The Gamblaz? I haven’t spoke to the Gamblaz for a minute, but for what I know there is no more Gamblaz. It’s officially unofficial that the Gamblaz is no more! Telemack and Devo The General are both doing their solo thing. They’re both good friends of mine and I wish them the best but unfortunately the Gamblaz couldn’t stay together due to the fact everybody wanted to persue their solo career. And that’s what it is! And there will not be another Gamblaz album with Sky Balla on it, that’s the next question…

Uhm, no. But if it wasn’t for the DJs, there would be no artists, remember that! So shouts out to all the DJs that support me and my movement – I support y’all! You have to understand: if it wasn’t for the DJs wether it’s Mixtape-, Mixshow-, Radio Station- or Club-DJs, there would be no breakthrough artists. You understand? Also shouts out to Germany, the whole european rap scene, all the upcoming artists, producers and DJs. Keep doing your thing, stay on the grind and I’ll see y’all at the top!

Dolla (Tha Raven Of The Flock) feat. Fatal Image – Get Yo’ Drawz Out Ya’ Boodie ›