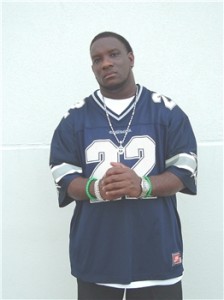 Introduce yourself to the people in Germany please.

In regard of the title of your latest EP: why is livin’ hell to you?

Since the beginning of time, to me hell has been on earth before and since the Al Capone and Adolf Hitler era as well as today’s events. Because in this world that we live in today, we have preachers molesting children, racism, innocent people dying from gang banging – and to sum it up even better just listen to the song by the Black Eyed Peas “Wheres The Love”.

What happended in your life?

My father left my mother to be a single parent, she then fell victim to domestic violence as I grew up. At the age 19, I had to murder that man in self-defense for pulling a knife on my mother in 1993, then in 1997 my best friend and his 1st child’s mother was robbed and murdered by his own 1st cousin then 3 months later my mother passed with cancer, leaving me to raise my two youngest sister’s by myself with no help.

I think I can ask you this: If livin is hell, is there anything that makes life still worthy to live?

Yes, because I have a 9 year old daughter now and I’m the only thing that stands in between my 2 younger sisters and a foster home. If I can change one persons life for the best through my music, that makes it all worth while.

Your songs reflect your own life, but I think you do also speak about social grievances in general – what’s the message behind your music?

What can we learn from your album?

The world is a beautiful but cruel place. Life is a never ending battle, but as long as you keep fighting and put your faith and trust in God, he’ll guide you through whatever.

How did you come up with the idea to rap? Tell me about your first steps as a rapper.

It’s funny to me now that I look back on 1986 because I always wanted to entertain since Micheal Jackson was with the Jackson 5, but I couldn’t sing. After attending a concert which included Public Enemy and Run DMC gave me the inspiration to rap and then Luther Campbell owned an independent record label then known as Skywalker Records inspired me to start my own label Greentown Records. After I discovered my love for rap and decided to make it into my profession, even back then my plans where to break into the music industry, then films, and create my own clothing line. 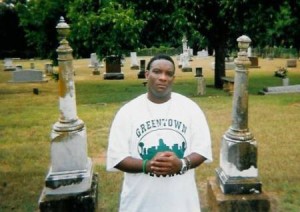 The music on “Livin Iz Hell” reminds me of how rap used to be back in the 90’s. Is this intended?

It’s funny that you asked that question because I wrote the lyrics and we created the tracks back in 1993, but because of everything I went through we didn’t get to record the songs until we done “Bop To You Drop” in 2001.

My style of music to me is considered “realistic music for the soul”.

In your song “Bop To You Drop” you give shout outs to cities all over the country. What’s your opinion about today’s rap-music?

Back to your own music – what’s your favorite track on the EP?

“Where’s Daddy” – because that song hit home with me and alot of other people that grew up around me without a father.

How has the response to the record been yet?

I thank God because the response to the record has been great across the world. 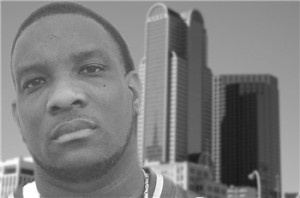 You told me that you started your won label Green Town Records. Tell me something about it. Do you have any other artist on there (one song on the EP features Dely Del)?

I came up with the concept in 1986, but it was made official in 2001. Dely Del is actually with another label, but we did sign our first artist in 2003, but the situation didn’t work out, so now were just focusing on myself right now.

Do you have any other records out or is “Livin Iz Hell EP” your debut to the game?

What’s comin’ up next from Trixx? What are your plans for the future?

Right now we’re still pushing the “Livin Iz Hell EP” and currently working on the “Livin Iz Hell LP”. My plans for the future is to make Greentown Records and myself a part of not only rap but be a key player in the history of the music business and to continue to make music that will make you happy and make you sad, make you laugh and make you mad.

I’m active in alot of communities, and I try to stick to alot of old school values like treating others like I’ll want to be treated and I try to spend as much time as I can with my daughter and sisters.

Do you have any final words to the people on planet earth?

I want to thank God, my family, friends and my fans that supported my career and no matter what you are going through or try to do in life, put God first and never give up. To those that got “Livin Iz Hell EP”, thanks and to the ones that don’t have it, go and pick it up and be on the look out for the “Livin Iz Hell LP”, and remember that “Life is short, so treat yourself, don’t cheat yourself”. Thanks and Greenup !!!