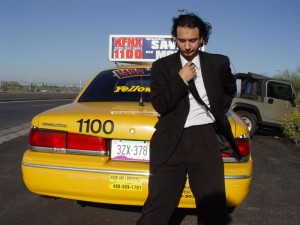 Good. I am most definitely blessed. My sister just had a healthy baby and the album is getting great reviews. And best of all, God is teaching me more and more about his grace every day.

What’s going on in Phoenix? How’s Phoenix’s Hip-Hop scene? Who would you recommend? Plus, who are you working with and who would you like to work with someday?

Phoenix, Phoenix. Hmmmm. (concentrates for a second) Well, not many people know that Phoenix is now the 5th largest city in the U.S. – it’s big. So the scene here is growing everyday. While Phoenix is still not as innovative in terms of style as a New York, LA, Philly, or Detroit, the thing I really dig about it out here is it’s pretty positive. Overall, there’s just a lot of nice people involved, ya’know? But keep on checkin’ for us, one day Phoenix will blow up. For more about the “Valley of the Sun”, hit up www.uau.8m.com.

Apart from making music, you are also a coffee shop poet and also joined some Poetry Slams. Can you make up the roots of your rhyme talent?

You know, I never even considered myself to be super musically talented. Truly musically gifted folks are people like Louis Armstrong, John Williams, or Luciano Pavarotti. What drives me is a love for WORDS. I love language – the manipulation of it, the creation of new words and uses, double meanings – all of it. The power of words is what initially attracted me to rap in the first place. I guess that’s why they call me “Vocab” (laughs).

Who influenced you in the past and who inspires you nowadays?

At first I was the world’s biggest Chino XL fan. Now, I’m more into folks like Speech from Arrested Development, Matisyahu, Pigeon John, and Morcheeba. I think that’s because they’re more driven by harmonies and melodies as opposed to only rhythmic elements. More musical balance – that’s the direction I’d love to move into. It’s just so daggone hard sometimes (sighs). 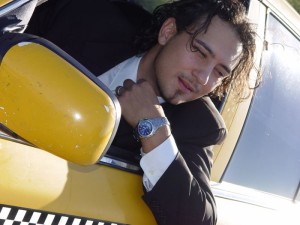 So, how deep are the poetry scene and hip-hop linked to each other? I know some artists who originally came from the poetry scene, but I think most people don’t really know too much about poetry slams and that whole community as such. Would you be so kind and put the main infos into a nutshell, please?

nps2005.org and poetryslam.com are the best sites for that. I even do a few slam-type poems on the album. Heads seemed to really feel those. Basically, slam poetry is performance based poetry – more flamboyant, aggressive, and unrestricted than Shakespeare or Frost. I hear it’s getting pretty big in Europe, actually.

Which are the main values of your life? We are living in a world that is confronted with terrorism and war, discrimination, poverty and a lot of other social deficiencies. What’s important for Vocab Malone and what is striking you in today’s world?

Dang, that’s loaded. You know what, I’m gonna’ give a really strange answer – I just recommend people read The Name by Franklin Graham. Parts of it may seem offensive but it’s true and a great place to start. Seriously.

What do you want people to associate with the name Vocab Malone though?

“Fun with a purpose”. Is that corny? Ok, a half German, half Italian dude who loves 90’s hip hop and wants fans to become friends. Awww, man, that’s corny, too. Whatever. I’m just corny. (snickers)

You attended a rather religious education at the Bible University, Arizona, I guess. How deep is religion involved in your life?

Religion? I don’t mean to be crass but I despise religion. God Himself abhors it. Hates it. Now Yeshua from Nazareth, Israel, that’s another story. He’s the reason I went to Bible college. Glad I did. Hey, don’t trip! How many MC’s you know that went to Bible College, huh? What, foo’! (laughs loudly) 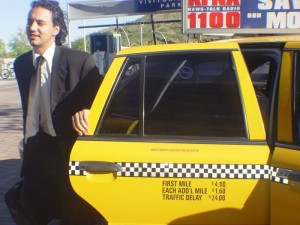 Please, tell us something about the world’s first “holy hip hopera” (The One).

Imagine “Jesus Christ Superstar” or “Godspell” set to banging drums and sampled loops – got it yet? That, my friends, is The One.

From my point of view, you’re not quite representing any of the usual stereotypes of hip-hop. What is hip-hop for you? What is your definition of hip-hop?

It’s weird when I hear that because I used to literally worship hip hop as if it was an actual deity – no joke. Now that the true deity, God, has freed me from that, I feel I can be more of myself. Man, I used to be late for work just to take pics of graff off the side of the freeway, I used to skip school to tag the school, I used to take a bus into the *real* ‘hood just to battle rap, I used to dream about hip hop night and day. Then I realized hip hop without its Creator is useless – an empty void – just turn on MTV for proof. Now I feel I want to help “redeem” hip hop, if that doesn’t sound too grandiose.

What are your plans for the future? Any upcoming projects?

I’m heading up a new collective called PEOPLE THAT RAP – we should have some new stuff in 2006.

Do you have any advice for people reading this interview?

Alright, thank you very much for the interview. Any shout-outs you’d like to drop?