What’s up, who’s on the other line?

What’s up, this is ya boy Bloc Bleeda with Stampede Records – one of Dallas, Texas finest.

Have you lived in Dallas all your life?

I experienced pain at a young age: I lost both of my parents when I was young and grandparents raised me the best they could having a house full of kids. I grew up sharing clothes with my cousins, I was born a hustler cutting yards, pumping gas. My grades was good in school. It wasn’t the best hood but it we made it work. I learned about the streets early in life. My grandmother owned a few pool halls I grew up in the clubs, listening to the blues and jazz. If I knew how to sing I wanted to be an R&B artist.

In 2002 you debuted on the “Our Tyme 2 Shine” compilation, which dropped on Stampede Records. Tell us about the history of the label…

Stampede Records started in 1995 with a dream. Joesph “BoBo” Watkins and Terrence “Bo-Leg” Randolph started out with a bunch of guys that grew together, decided to get together and make a better life for ourselves. Bo-Leg and me are cousins, both raised by our grand parents in the same house. The first album released under Stampede Records “Bo Something In The Water” 1996, it received airplay and we got a deal, but we didn’t know the business so we got fucked. We then had the single “Just A G” featuring Spice 1, but the album was never released. In 1999, “Outsyde Boyz and Outsyde Girlz sold a few units. In 2002, the compilation “Our Time 2 Shine” with the hit single “Bloc Bleeda” followed. In 2003: “Boleg Straight From High Street” with the hit single “I Got Money” – the rest is history in the making.

The got him on Stand Still at the moment. Tell everybody to say a prayer for him. 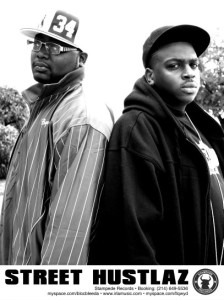 So what about your current and future projects? The Street Hustlaz…

… consist of Rodrick “BlocBleeda” Randolph, LaTrone “Hustleman” Turner, Derrick “DK” Brown at this time. Street Hustlaz’ first project “My Block 2 Yo Block” consisted of BlocBleeda, Hustleman, TuTu Mr, O.C.T. and Greg “G-Hud” Hudson. This was a project that was put together to help re-establish my name since I hadn’t drop an album since 2002 – and to help Hollow Point Records get their name out as well. You can purchase it online at http://www.blocbleeda.com or http://www.irlamusic.com

“Bloc’s Point Of View” was put together to show listners that all rappers from the south don’t just rap about the same stuff and that Dallas, Texas has some talent as well as good music. You can purchase it online as well.

When can we expect your solo album “The Bloc That Was Overlooked”?

Right now, “The Bloc That Was Overlooked” is scheduled to release spring 2008. The production will be done by Shawn “Big Boss” Hubbard, new producer Frank out of Pine Bluff, Arkansas – now a Dallas and Mook & J of the Trak Twinz who produced Nelly featuring Tim McGraw’s “Over and Over Again” and Britney Spears’ “Toxic”. Features will consist of unsigned artist from Dallas Lex Lu, Money Waters, Que P, Big Ben, Mike-Mike, Big B, Jimmy D, Walt Love, B-Love, Hustleman, DK, DB – all from the Stampede Family.

Do you feel like the real rap artists get overlooked nowadays?

Rap today is more business than talent, the mixtape game is saturated, it’s political as hell and not as creative as it once was. Producers and artist are sampling more which means less creativity. Only a few people are not scared to step out the box.

How would you describe a regular day in your life right now? 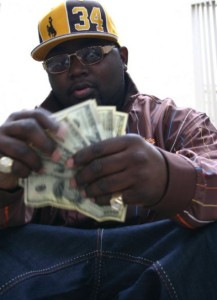 A regular day consists of my kids, me writing, recording either me or other artist. Shit man just doing music. I am also part of the Million More Movement which consist of the NAACP, Urban League, Nation of Islam, New Black Panther Party, Comedian Rickey Smiley – they are responsible for the release of Shaqunda Cotton, the 15 year old that was jailed for one year and sentenced to seven years for pushing a white hall monitor in Paris, Texas. DK, KD from Str8 Muzik, Solo from 304 Records and myself recorded the song “Freedom & Justice” once she was released. Me and DK also did a song for Jena 6 entitled “Just Because I’m Black”. I also do positive music for world events. Man, I crossed over to the political side of game. See, I’m a cool, mellow, humble, just plain laid back type of dude. But don’t let the smooth taste fool you. I can be that muthafucka when neccessary.

What has been the worst experience in your life up to this day?

The worst experience in my life was having a pistol put on my nose for wearing the wrong color in a hood in Dallas and being jumped by the Dallas Police.

Alright – one last message from D-Town to Germany?

It’s ya boy Bloc Bleeda getting’ at cha straight from heart and off tha dome! Don’t let nobody tell you that you can’t do whatever it is you set your mind to do. Put GOD first, family second, work third – keep the faith and everything else will fall in place. Shoutout to Juju, Don$P, my kids, Stampede Records Fans and family. To all the Dallas, TX unsigned artists. Free Bo-Leg, Twisted Black, Rizzo and Big Rich! Until next time…

Thats what’s up! You can hit up Bloc Bleeda on his Myspace or you can hook up with Patti Geiger (Ceo of Stampede Records and IRLA) under 214-649-5536 or also on Myspace. Independent Record Label Association (IRLA) is an organization that assists, trains and educates businesses and/or individuals about the music business the legal and right way. She also does speak at conferences and do consulting as well.

Detroit’s Most Wanted – Bow The Fuck Down ›