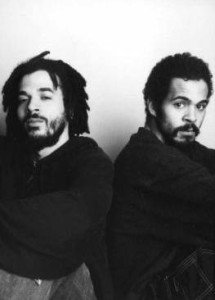 First of all: Introduce yourself to Germany and the world!

Musa: I am Musa the Penultimate.

What’s the meaning behind ‘DCNY’?

Tre: D.C.N.Y. Means a few things. First is Divine Cultured Native Youth, second is we are Da Craziest Niggas Yet. Last but not least I’m from Washington D.C. and Musa is from N.Y.

You call yourself a truncated form of the House Of Reps. Who/what is that?

Musa: I wouldn’t say a truncated form as much as an evolved form. House of Reps started with me and my friend Virg. Later an associate of his – named Life – joined the group. TRE was young but he was the fourth member. Things didn’t work out for the group (we had a little 12″ release in 96 that garnered little attention) and we kinda went separate ways. Tre and I continued making music.

You’ve recently released your debut-album “HipHop For Dummies”. What’s the idea behind such a title?

Tre: To me it means that this is what you would call “a guide line to the traditional style of emceeing, rhyming, and beat making” which in all is just a fragment of what hip hop is all about.

Are there any other – earlier – releases of DCNY? Please tell me something about how it all began…

TRE: It all began long long ago in a galaxy far far away! Sike im kidding… There are songs in the archives and the cosmic collective brought us together and began it all.

Musa: Tre and I are cousins. I’ve been doing hip hop a LONG time. I started as strictly an MC and then got into beats. As my appetite for rhyming waned, TRE happened to pick up the pen.

You’re music is influenced by many styles – which music do you listen to when you’re at home?

Tre: I listen to everything but in general I listen to all the ol’ school such as KRS-1, Public Enemy, De La Soul, R.A.T.M., Radio Head… shit I can go on and on. I have a jukebox on my apple mac.

Musa: I listen to a lot of 70s stuff. A lot of so-called underground hip hop- Little Brother, Pete Rock, Freddie Foxx etc. But I play everything at home. From Pink Floyd and Jethro Tull to Eddie Harris and Herbie Hancock, Prince to Michael Jackson. EVERYTHING.

In “Bin Laden” – one of the hidden bonus tracks on your album – you speak about the american wars after 9/11. What is President Bush doing wrong? (How) has life in New York City changed after the attacks on the World Trade Center in 2001?

Tre: WOW! I don’t know how much I am allowed to say on that fact because its really alot deeper than what we all are aware of. On the other hand the life of New York seems patriotic as a matter of fact the whole country is empathetic to this “Terrorism” situation that America faces right now.

Musa: Bush wasn’t even elected. He stole the presidency. Then 9/11 occurs and we go fight a war in an impoverished country that had no direct connection to the attacks: 17 of the alleged hijackers were from Saudi Arabia. Nevermind this [Afghanistan] is a country they want to build an oil pipeline through. Then Bush fabricates stories of Weapons of Mass Destruction in Iraq and goes to war there, protects the oil industry there and starts handing out millions (billions) of dollars in contracts to Halliburton, Bechtel and other corporations in which himself and his father, friends, cabinet members etc. own or will profit from. That’s what Bush is doing wrong!

Are there any political/religious groups or activists, whose work you appreciate?

Tre: Mmmm not yet, nope I can’t say that I can at the moment.

Musa: A lot of people are doing great things. It would be against the law of self preservation if the MEDIA reported what people were really doing.

What’s your opinion about the state of hiphop and rap in general? Is there a lack of political attitude? Is it still possible to make a change?

Tre: Hip hop mainstream is at a downfall like the stock market crash in the 30’s. The politics and every thing is cool if they rhyme about it but it’s not really what hip hop’s about. The change? Shit its making money and that’s what the bullshit is all about MONEY!

Musa: Like Mos Def said: Hip Hop is doing what we (the people) doing, and yeah right now shit is fucked up. Everybody just trying to get paid and that’s what hip hop is about, generally speaking.

Can you relate to other groups that hold it down (not only for political reasons)? Are there any artists you would like to do a record with?

Tre: I’d make a record with any one who’s up to par and kick the realness within the realm of true hearted hip hop.

Musa: I appreciate so many peoples art. I think collabing really has a lot to do with being able to vibe with the person. I don’t know about making a song with someone and just like laying verses and then shipping the protocols file across the country or some shit. But I THINK I would like to collab with a lot of peeps in a variety of styles.

What’s coming up next? What about your plans for the future: any collaborations, singles or maybe a new album?

Tre: Who knows whats next? Music, real hip hop shit. And as far as the collabing, its possible but who knows. I’d rather it be a surprise to all of us.

Where can the average HipHop-Listener from Germany buy your music?

Musa: Shout out to ugrap for the support and everybody in Germany. If everything works out we should be over there soon!