Could you tell me how exactly you were connected to the DFC family?

Overdose and I were part of the DFC family circle, which included Night and Day, Chuck Nyce, DJ Flash Technology, Po Broke Souls, Tee, Alpha and us. Actually, The “DFC” was one person at first – Shonnell Harris aka Redbone, who made the beats and wrote some raps 4 Breed’s first album – including most of the first verse of “Ain’t No Future In Yo Frontin'”. The group had actually broken up before “Future” was released, but reconvened shortly before its release with Alpha and Tee as Breed’s hype men. Because by then, Red went to prison. A year later, Shonnell gave the DFC name to Eric Flash. Po Broke, Chuck, OD and myself were originally going to become the DFC, but in some weird twist of fate, Alpha and Tee became the DFC instead. In the midst of the ensuing power struggle taking place, OD and I just decided to make music together. Despite everything that went on, OD and I stayed cool with everyone…which benefitted us in the long run, because the third person the “Shock Therapee” album cover is Red. He did the co-mix on the album. This took place right after he got out of prison. We had already recorded the album twice over, the first version was called “Kamikaze” and was never released. So his ears on the mix was important to us. 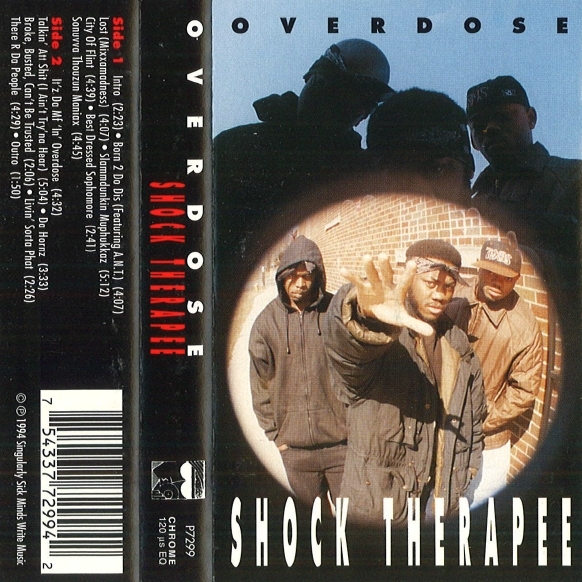 Was “Shock Therapee” also released on vinyl and CD?

It was only released on cassette. There is, maybe, one or two CD copies made, but OD has ‘em. I think. This is kind of cool you asking me about all of this. I mean, the history of “Shock Therapee” goes back 20 years from right about now. I’m glad you still love that project. I still listen to it and smile. At the time that we made it, we were kinda ahead of the curve of everyone else’s style back then. Most of the rappers that were big in Flint were influenced by Scarface, MC Eiht and Kool G Rap. I was into weird soundtracks and alternative music. OD listened to everything and everybody, so it fit us.

Why didn’t you release a follow-up album?

After the release of “Shock Therapee”, the Dr. Dre influence that took place in a lot of Flint projects was starting to become popular. Even though Pierre from Piernando Records was a jazz musician, he thought it would be better to follow a trend. I couldn’t do it – I like records and loops. OD and I just sorta faded away, but not before I co-produced Redbone’s only album “Troublesum Hard” (1995). OD was all over that album, doing adlibs and a verse on the posse cut “Just A Lil Sumpin”. OD and I are actually still in contact with each other. We’ve gotten together and threw some rhymes around the room. He’s in North Carolina right now. I’m still here just outside of Flint.

How do you mean you just faded away… what happened after “Shock Therapee”?

Flint got kinda paralyzed musically, in respect to our sound and what we did. I mean, me and OD were different from EVERYBODY else doing tapes at the time. No similarities in style, production values, none of that. Mostly everyone else in town was taking the blueprint that Ira and Shoestring and them (Dayton Family) and what Top Authority were doing and mowing it into the floor with rather sometimey results. You had people that stood out, like Slep, Ruff N Rugged, Scurvy…but they were far and few between. We all reconvened a year later to do Redbone’s album, “Troublesum Hard”, where I basically stepped back into my band routes and play guitar and basses and manipulate keylines over loops. But by then, OD and I were fathers and were both working. We had a record planned, something we were gonna call “Buck And The Preacher”, which was gonna run musically back towards the sound I perfected during “Troublesum”. But it never happened. Two years later, I’m playing in a band and DJing in clubs and raves throughout the midwest.

You told me that you like records and loops. What were your role models when you first started producing?

My production influences are kind of….non-specific. I’m a kid born and raised on early rock, funk, jazz and blues who eventually drifted into new wave and alternative music, but with electronic music and hip-hop as bases. The obvious influences are The Bomb Squad, Sir Jinx, Mantronik, The Boogiemen, DJ Muggs, Pete Rock and especially Premier. But I take hints from Siouxsie and the Banshees, Todd Rundgren, The Beatles, Yellow Magic Orchestra, Kraftwerk, stuff like that. The person that I credit for making me look at the groove within the groove was the original DFC: Shonnell Harris aka Redbone. He taught me that it worked best if my neck snapped – figuratively- whenever I heard the loop on repeat.

How did the rap scene in Flint look like right before Breed came in? Who were the most important rappers and producers back then, who paved the way?

The rap scene in Flint was kinda loose, but the quality was there. You had people like Jake N Jay, The Unknown Scratcher, The Flintstones. You’d see a record or two a year, maybe. We mostly had bands before that: all of the post-Ready For The World bands like N-Tune With The Nu, De’Orr and my band, Your’z Truly. Actually, the first record that kinda made it outside of the Flint area was the very first techno and rap hybrid: The Flintstones’ “Party Race” was produced by Juan Atkins and released on his Metroplex label in ’86.

Who do you consider the most important Flint rapper/group during the 90s?

Breed, then right behind him The Dayton Family. They applied the same work ethic and detail, and were the blueprint of everyone that followed. Breed’s influence will last lifetimes, past generations that saw him physically.

How do you remember Breed – as a person and also as a rapper to work with. What kind of man was he?

Eric, as a person….he was always the kind of dude that put his friends and his family and everyone around him on. He was generous to a fault and he was, most times, above beef. Even though, if he had to write about you on a track, you were gettin’ it. A pretty funny dude, if you got to hang around him. Talked like his daddy. Real purposeful when he speaks to you. Humble, despite the influence that he set. I mean, Eric was the first real loud salvo coming from the Midwest. Before Twista. Before Common. Before Kanye. Before Bone Thugs. That’s a whole lotta fools on your back….

What are you up to today?

Today, it’s a whole nother thing. I started getting back into doing hip-hop again when The Artfull Dodgers (US, Flint, MI…and they came first before the 2-step duo) and I started working together in 2001. I’m now one of the producers and their tour DJ. I’m also part of a crew of DJs and producers called Detroit Techno Militia. I’ve done remixes for local musical luminaries such as Piranhahead and SuperDre, and right now, I’m working on my first vinyl release from my own label, Irrational Muzikwerx. I’m also in a band of former and current Parliament/Funkadelic members called Enema Squad and just got pulled into an unnamed project with Amp Fiddler. There’s lots of other things going on right now. I’m just ranting on what’s in front of me at the moment. It changes. A lot.