Introduce yourself and your crew to the readers, please.

Which equipment do you use for your productions?

My frist two albums I produced with an Alesis QS6 keyboard and Emagic Logic software, but since ’99 I’ve been all about my MPC 2000XL. I’ve got some other equipment too, secret shit, and another sampler, but most of production is done with my MPC. 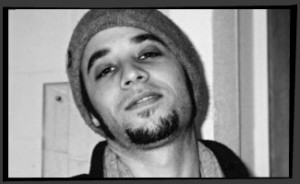 Do you have a typical method when you create a new beat or is it always a different approach?

It changes, but for the most part, it’s all about what records I am buying and shit like that. I usually power-up the gear, pull records and go from there. I used to always start with the drums, but since I’ve been using the mpc, I find that starting with some sounds or samples is more comfortable. Then I’ll search for drum sounds, do some programming and sequencing and then I’ll go back and try to find more sounds and samples to fit.

Are you involved in the process of finding topics for the songs you produce or do you just give the mcs an instrumental, allowing them to find a topic on their own, I mean, just letting the instrumental inspire them?

Ya know I used to name all my tracks and give them out and have something fit to that, like with my instrumental track “Below Sea Level” from Element 113, I made that, but then when Ehnertia and Cap (Scratch Paper) decided to make a song out of it, they basically took that name and idea and formulated a song around that. But really on a whole, I’ll burn some beats on cd and give them to Jay and Laz (Disflex6) or whoever I have in mind for the track and then let them do whatever they want with it. Once they’ve written for it, we’ll often times sit down and sequence it out, and then I’ll go back and add breakdowns etc, and then we’ll record. After that, I’ll mix it and there it is.

Are there any mcs out there with whom you’d really love to work with?

Of course there are plenty, and like most indie producers today I would like to work with some of those Def Jux cats (Aesop Rock, Mr. Lif). I worked with PSC, but I’ve always been a big Eligh fan, so doin somethin with him would be dope. On my list for my next project I wanna get beats to Tes, Aloe Blacc, Subtitle, and of course my crew, but really I want to produce entire projects with people, not just a song… we’ll see what the future brings.

On “Atomik Age”, there’s this interesting song called “Hate Maker” which features Dublin. Does it also reflect your opinion? What’s your opinion about religions?

I’d say it does, cus really I’ve always been weary of organized religion, especially christianity. I guess, when people need to be told by someone else what to believe and what is right/wrong etc, that’s not good, at least not to me. Religious people spend too much time analyzing the details, instead of just using it as a guide. I mean how can white-supremeasits and pro black christians from the south, read the same book and get such two different views… shit is crazy to me. Religion just seems to breed hate, and that shit ain’t for me.

What do you think about rap-music in general these days?

Rap music is rap music…some good, some crap, mostly crap, but there is alot of creative people making hip hop these days. I guess the mainstream has gotten too caught up with sales figures to really make any important music, but there are some, like Outkast, but on the whole, MTV, and clear channel have really fucked up the music game. It’s like if you see a video for a song is on MTV or BET, then you know it’s gonna get play on the radio, and not just one station, but every station in every city, until they play the shit out of it. Then it’s onto the next “hot” song, which continues the cycle. But as for indie hip hop, there is too much to keep up with. But it has opened the door for people like myself. I mean when a group like Atmosphere or Aesop Rock can be seen on tv that’s tight. We’ll just have to see what happens, maybe by next year you’ll see an elon.is video on MTV… yeahhhh right.

Your father painted the cover for “Atomik Age”, didn’t he? Do you come from a creative family? If so, was it important for you when you decided to make music?

Yeah he painted the cover when my mom was pregnant with me… that’s why there is a baby up in the brain… my pops is a creative cat for sure. I used to always ask him to draw things for me, and he does woodwork and design and I think that is were I got my creativity from. plus I went to a school that cared alot more about creativity then academics. But the music thing just kind of happened, it really wasn’t a conscious thing. But now if I can’t make music for a while, a couple weeks, or something, I just don’t feel right. 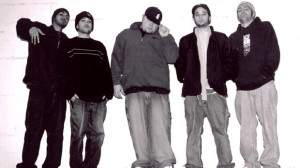 Are you currently working on a new project?

Yeah we (Disflex6/Sunset Leagues) are working on all sorts of new projects. I am involved in all of them because i record, and mix everything, plus I always try to get at least one production on every album. We’ve got 2 new Disflex6 records, “Slow Burn” and “The Loop Hole”. We also have the new PBS album, “War Of Art” and we have the new Ehnertia album “Late Nights Early”. Plus I worked on the new Z-Man (Hieroglyphics/Refill) record “Dope Or Dogfood”, and I produced his tour record, “Anti-Nerd”… I fuckin worked on that project for over a year. And I just heard from Shane (Sublevel-Epidemic/sofarwest.com) that this project I did with Randy (Lip Service/JKC) called “Turning of the Worm” is going to be released next week, so yeah plenty of music to keep me busy.

Here is the place for some shout outs!

My crew, the people who enjoy our music, and my family… cheesy huh?!