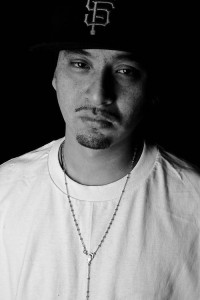 Please introduce urself a lil bit to the audience out here mane.

I’m Equipto, a Hip-Hop artist commin’ out of San Francisco…

What’s the meaning behind your name and how you came up with it?

My friend gave me the nickname back in the day and it stuck. I like to say the definition is “to provide what’s needed”… to be Equipt with wutever, ya know…

Please tell the people out there a lil bit about ur style and ur music please.

I would have to say my style is simple. I find or make beats that I like, and then I just write and express what ever comes to me at the time, or vice-versa. I don’t wanna lose people with my delivery or content, so I dont like doin’ too much on the mic. I like to make music that I would like to hear myself, dope beats and tight raps. I’ve heard people say my style is real east coastish and I’ve had people label my music Bay Areaish. I guess I belong somewhere in between there. It’s feel music…

At what time did you start listening to Hip-Hop music and let me know about your biggest influences. How do you came up to start rapping?

I started out REAL ole school. Kurtis Blow and Run DMC were my 1st records. Growin’ up I listened to alotta radio. But see, back then there was barely any stations that would really play rap, exept for KPOO. So you would really have to search for the music. I’de say Big Daddy Kane was one of my biggest influences. The whole Cold Chillin’ crew was doin’ it… Masta Ace, Biz, Kool G, etc… I loved GangStarr’s music, 415, Hugh E Mc, Too Short, Ice T, Public Enemy. I grew up in the Golden Era. My father exposed me to all kinds of different music growin up. But rappin was a natural thing to me. I fell in love as soon as I heard it and I knew one day I would be makin’ the music myself.

What do you think about the state of Hip-Hop at the moment?

Hip Hop is bigger than it’s EVER been. Influencin’ people all over the world and it’s sad to see that groups or rappers that really speak on real issues that effect us, don’t get video or radio play. Kids are growin up to Ja Rule, Nick Cannon and other things that ain’t Hip Hop. Anyone can wear the costume and play the part nowadays. But at the moment, I see myself as one of the many rebels in this independent industry tryin’ to spread the word. I’ll always love rap regardless what it goes threw.

What can u tell me about ur cds? How many u got out and where can people get them?

I got Volume’s 1 threw 3 (Anm. v. Puddahmaan: Vintage Vinyl Vol. 1: Avantgarde, Vol. 2: Like There’s No Tomorrow & Vol. 3: It Hurts So Good), “Midnite Machine Gun” (The album with Nickatina), a mix CD, and my new album droppin with Million Dollar Dream in JAN 2004. I gotta lotta future projects in the works though. Everything should be available on line @ MILLIONDOLLARDREAM.COM or try your local record store.

Can you make a living off your music when so many people nowadays just download full albums from the internet and ain’t willing to purchase music no more?

Yes it’s hard to make a living off your music. But I think if you grow to love the ins & outs of the game and treat it like your job, it can turn out good. I can make a living off my music because of the goals I set for myself. I don’t need a huge house for me to be satisfied. As long as I can provide the things I need and sometimes want, I’m cooo…
I think shows and traveling help alot with promoting yourself. Showing your face and having the product available is important in this game. Put out quality music and I think the people’s support will show. Hopefully… hehehe.

U from Frisco, CA, right? What can u tell me about the Rap Scene over there? Is it different to the other citys or states?

Right now the whole Bay Scene is real crowded. Like II said, Rap is bigger than its ever been so everybody is rappin’ or producin’ or promotin’, it’s crazy. Don’t get me wrong, there’s alotta undiscovered talent out this way. Eventually I think the raw will shine threw in the long run. I think Frisco is different because of the diversity of the city and you can hear that in the music out here. The music reflects the life people live and experience in Frisco. 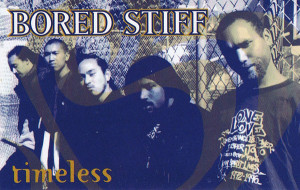 And how big are the differences between the whole west coast?

The whole west coast is pretty much on the same vibe. I honestly think that Cali sets the trends though. But all threw Portland, Seattle, Nevada, etc. It’s all coo… They all show me love so I got love for them.

Wassup with Bored Stiff right now? Is the group still in effect? Any upcoming projects?

Bored Stiff is still around makin’ music, WE just waitin’ on the right oppurtunity and deal to drop it. I think the music we make together is worth more than just throwin’ it out there independently. Sounds weird but true.

How did you hook up with Andre Nickatina and let me know what happens when you both were in the studio?

A record label I was doin bizness with wanted us to do a song for a compilation. That ended up beeing “Blueprints Of War” and ever since its been coo… When we get in the studio we play the beat over and over hella loud. Blow, chop it up and knock it out. Keep the chemistry simple. If it aint broke, don’t fix it.

I had the chance to watch some parts of the Nickatina movie on his CR3 bonus DVD and you’re in that movie as well actin like some Silent Bob character. Has this role anything to do with your real life or your relationship to Nickatina?

The role in the CR3/DVD has nothin to do with my real life. That was a movie that had a actual script. I’m really not a Silent Bob type a person. I think I was more myself towards the end of the film though. That’s when I got to speak a lil-bit and talk some trash.

What can u tell me about ur future like in the next 5 years. What can people wait for?

In the next 5 years i see myself living in Europe. Maybe Denmark. Beeing musically involved and writing and directing films. Some type of outlet to express myself. I wanna coach a highschool basketball team one day. Thats it. 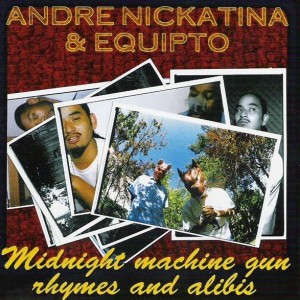 What do u think about overseas music and collaboration with rappers from there? Did you already hooked up with any??

I’ve done music with european fokes, thats actually on my Vol 3 CD. I’m currently workin’ on some colabs with some japanese rappers & producers. Lil Jay from Copenhagen produced the first track (fa’ sho) off of me and Nickatina’s CD. I love networkin’ overseas. To me thats the best part of the game because the music is somewhat still innocent out there. They still have curiosity and love for the music and out here everyones waay 2 competitive.

U ever been to europe or thought about a tour in europe or somethin like that?

I actually toured all threw out Denmark with Bored Stiff some years back. It was a great experience. I recommend everyone that does music to at least make one trip over there. It’s a beautiful country with a cooo vibe.

What about them haters? U ever got sum beef with other rappers or clicks?

I got a lil problem with some cats in the game. I don’t instigate, I just speak on it. I tried to holla at MC Jin when he was in my city, just to let him know where he was at, but he kinda played me off I ain’t really trippin’, I just won’t forget that. Another cat is some rapper called Takona-X from Japan. He disrespected me backstage at a show so we had some words and he jetted out. All I ask from them cats is respect in this game, thats all…

What about the personal Equipto? What can u tell me about ur life besides the music?

My life besides music? I like sports. Whether it’s playin’, watchin’ or gamblin’ on it. I try to spend time with my family. But honestly this rap stuff takes up alot of my time. I like just kickin’ back at the crib and listenin’ to some marvin Gaye. Maybe hit u a club or function when I feel like it.. watch a movie that I’ve seen hella times on DVD… call up some fokes I aint talked to in a while. Finish readin’ a book I started. Things that regular people do.

Let me know what you think about George Bush and the state of the world?

BUSH?? Man… Amerikka has always had they hands in every country’s pocket. It’s nothing new, it’s just sad. True I am an american or whatever. But not a proud one. This country has destroyed people’s culture from all over the world. Killed innocent familys all in the act of war.They try to distract you with the Bin-Laden and the capturing of Hussein, when Amerikka is the real enemy. We should fear our own government. Thats who’s doin’ all the dirt and then looking like the heros.

At last u got sum shout out to ur fans or fuck yous for ur haters?

Of course XXXX the haters. But to anyone tryin to do they thing out there, make sure you have the love for it and know the history behind the history. Find what you love doin’ and don’t loose it… PEACE… 1