How did it come about that you became Lil’ Mac – who brought you into the world of music?

Lil’ Mac is a nickname given to me from birth. I am my parents firstborn and I carry my father’s name. Most people call him Big Mac. At 38, I am still referred to as Lil’ Mac by family members! *laughs* The producers of my very first album were a local New Orleans emcee and DJ duo whom called themselves Gregory D. and Mannie Fresh. This was back in the late 80’s.

A few years later you re-emerged with the single “Mad Or Jealous”. How did you get to know Storm?

Storm and my brother Ghost attended the same junior high school. He played on the basketball team and she was one of the cheerleaders. A couple of years later I ran into her at a friend name Raj Smoove’s house. It was there that I first heard her rhyme and instantly became a fan! We recorded about 15 or more songs back then for an album we call “The Scandalous.” It was never released.

Another lesser known episode of your music career is your time with the Psychoward. What was your way into this project?

Me and two of my good friends, Chill and Jahbo, started what would eventually be called the Psychoward in high school. Back then we called ourselves the Headbangaz, and we use to cut class to hang in the library where we would read and put songs together. Soon we would link up with others in the city whom shared our same love for what I considered real hip hop at the time. Those groups included Mac and Storm, OTC, Natural Flavors, Derelicts, Mind Your Bizness, Renegods, Forces Of Nature, Black Plague, Karamelo, Koola, Kool Breeze, One Eye Willie, and more. Psychoward was the name chosen by Chill to brand the collective.

I guess alot of local rappers tried to get signed to No Limit back then. How did you make it happen?

A combination of folks are responsible for my signing with No Limit Records. I’d known most of the label’s artists and producers for quite some time. My cousin Skinew was part of a No Limit trio whom called themselves Prime Suspects. The other two members of the group were his high school buddies, one of which was Master P’s first cousin. When he initally told me about the label I was reluctant. After all, I’d grew up listening to East Coast emcees, and I wasn’t too fond of the No Limit sound. When I learned that KLC would be doing the production, I was a bit more comfortable. Me and KLC are from the same neighborhood, and I knew we both shared a love for true lyricism. 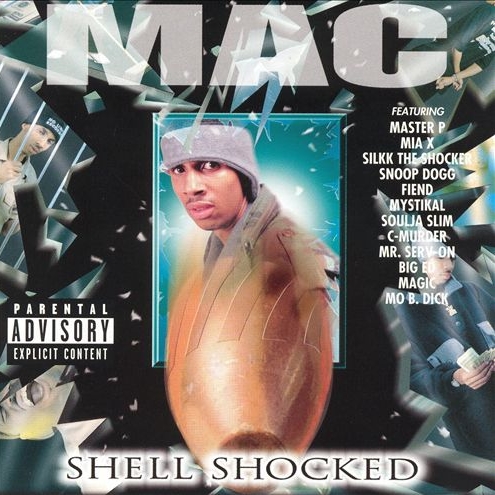 Commercially, “Shell Shocked” was your biggest success. How do you remember the recording process of this album?

Recording “Shell Shocked” was both fun and frustrating. It was definitely fun working with the guys for my official release, but the timelines were frustrating for any artist. No Limit was releasing new albums every two weeks, so perfecting a particular song was out of the question. For instance there’s a song on “Shell Shocked” entitled “Meet Me At The Hotel” that could’ve been a smash club hit had it weren’t for the terrible mix of the song. The bass was too loud, and it drowned out the vocals. It’s the little things that I believe make the difference between a good song and a smash hit. Deadlines were deadlines however, and this formular was working for the label. There were a few more mishaps along the way, but overall it was fun. I remember KLC being excited about it because we’d been wanting to work together for a while.

On the intro of “Slow Ya Roll” you give a shoutout to Mike King and 22nd street in Columbus Ohio. Who’s that and what’s your affiliation with the Midwest?

Mike King is a brother I met while making a guest appearance with Big Ed (R.I.P.) at a high school in Columbus, Ohio. He reached out to me a few months ago, and said that he’s doing fine. As for the Midwest, it was definitely No Limit’s biggest market. It was surprisingly more supportive of the No Limit sound in some ways than the South. They showed a lot of love.

It was one of No Limit’s best-selling releases of 1998. Did you expect it to do so well?

As for “Shell Shocked’s” success, I was more relieved than anything. We’d put so much into it in so little time that it was definitely a relief to know that it was selling well. During the whole process we were not only recording songs for my album but for my labelmates as well. It was crazy, but we pulled it off!