First of all, please introduce yourself to those readers who may not have heard of you before.

Hi, my name is Ms. Kenya. I am also known as Da Black Betty Crocka, Bankroll Betty and Ms. Suchafnlady. 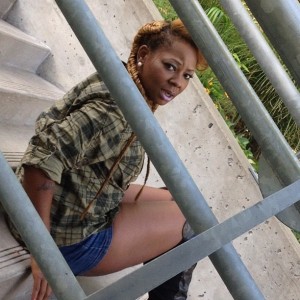 My early childhood started off pretty normal: one older brother, one younger brother, middle class married parents, real modern american family. Then things took a turn south and I had to grow up pretty quick. As a teenage mother with a widow for a mother of my own, I rooted myself in the part of Third Ward known as Lucky 7 getting both game and knowledge from all over the City of Houston while I grew.

I’ve always had a niche for entertaining. It was just something that came naturally. Everytime I heard anything with a tune behind it, it grasp my attention, and sent me to another place. That’s what I consider real love.

You debuted on the scene with Mike Moe’s Underground Rap League Series. How did you hook up with him? Could you just give us a little insight to that time?

Mike Moe used to get his hair cut on my block, “Lucky 7″. We knew that his involvement with music was pretty serious. Tron-O caught Mike Moe coming out of the barber shop and passed him a cd and assured him that if he listened, he would not be disappointed. The rest is history. Mike Moe was already involved with Bleeda, so we met through Mike Moe, but Cal Wayne is from my neighborhood “3rd Ward, Tx.” So we pretty much have always known each other. Mike Moe saw in us what we probably did not see in ourselves and that gave us the confidence we needed to pursue our dreams. “Super Bitch” dropped in the streets. It did not hit the internet at the time of the release, but we are going to release it on the internet in the near future. We just flooded the streets with it.

What distinguishes you from other female rappers?

I’m passionate about all that I spit, because the things that I say are a testament to the life I have lived thus far. I’m driven by my passion.

Your single “I Am” ft. the legendary K-Rino & J-Dawg has been out for a minute. Tell us something about that track!! How did you hook up with K-Rino & J-Dawg?

The song is a tribute to Trayvon Martin. I was disturbed by the whole situation and my manager suggested that I do a song about it. Things of this nature have been going on for centuries and very little people seem to take interest in it. “It started out with Malcolm X, the first one considered as a threat. Then it was Dr. Martin Luther, politically correct they start shooting. They keep us all divided, they knowing where the prey is at, but us, we gotta find it. We gone finish what y’all started. This right here’s about Trayvon Martin”, it speaks for itself. God is good. He allowed everything to just fall into place right on time. The video was recently recorded and will be released soon. Mo Bang Media did a excellent job with the video. Shout out to Bang for the love.

The track is produced by the german producer Blac Forest. Tell us something about that connection. 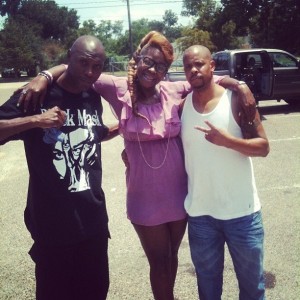 I knew of Blac Forest because of him reaching out to CalWayne and Lil T of The Brick Boys. I knew of his work, and was confident about my manager asking him to do the track for “I Am”. When I recieved the track, I was blown away, because it was exactly what I wanted, as if I was sitting right there with him while he did the track. Shout out to Blac Forest for a banging track.

What are your plans for the future?

I’m currently working on my album and another mixtape. I’ll be working with Houston producers such as Iroxx Trax, Majix Mike, Thirteen, It’s Me Baby Beats, and many more. I’m also gonna have to get Blac Forest to get me some more of that heat that he has as well.

Let’s get a little more personal…how would you describe your own character?

I’m a realist. I always try to be honest and up front about everything. I’m a hard worker, with a “show-me” type of attitude.

And the worsest thing that ever happened to you?

Growing up having to deal with addict parents. I was forced to bare a lot of responsibilities and grow up pretty fast.

What has been the greatest experience in your life up to date and why?

My greatest experience in my life would have to be my mothers recovery. I was allowed to have my mother back, and there is no better feeling in the world.

Are there any artists you would like to do a record with?

Yes. I would love to work with Jay-Z or Young Jeezy.

What do you think of rap today?

Besides Jay-Z, or Jeezy, I listen to a lot of underground music. I think that the mainstream music sends the wrong messages to our youth. It glorifies all the wrong things. But underground music stays on the level that I can relate to. Most underground artist rap about the struggle, or what they are trying to accomplish through music, so it touches my spirit. But mainstream is a redundant tune that stays in your head only. But that’s my own opinion.

I wish you big success for the future! Real recognize real! I have got one last question. What do you know about germany and what do you think about the german people?

Ha Ha Ha Ha. It’s funny you would ask me that, because I’m writing a documentary on my mother and she once lived in Germany. Things was a lot different then. Germans was told that “black people” have tails, so whenever they saw a black person, they was amused. I was tickled pink to hear such a thing, but eager to visit Germany even more than before.

Thanks a lot for taking the time – any last words or any shoutouts?

I thank God for making everything possible. I thank my mother for being the mother that she is. My family and friends for being so supportive of me, sharing my vision and believing in me. All of the “SuchaFnLady” supporters, I love you all. I thank my Hood “3rd Ward” for backing me up. Shout out to my management, “HTown Stand Up”. You can check me out on facebook @ MsKenya Suchafnlady or follow me on twitter @_suchafnlady_ or instgram @_suchafnlady_ or just Google Ms. Kenya. I really appreciate the love…