Qwazaar, how you doin right now? Could you please drop some words about yourself?

Nothings ever perfect, but I can say that I feel better right now than I’ve felt in a long time. Everything’s been falling into place like you envision it… so yeah everything’s cool…

Is there a special meaning behind your name?

Special meaning… nah… I used to have like a thousand crazy acronyms and such. But basically it means that I’m gonna shine bright regardless of where I’m at or who I’m with. 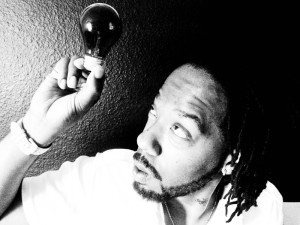 What are the characteristics of the man Qwa Brown and the musician Qwazaar?

I don’t know how to answer this one. There’s really no separation between the two. I’ve never been a story teller type of cat. Part of the reason that I started writing rhymes was just to get out some of the frustration that was going on in my mind and in my life. That’s really the only way I know how to write. Its not like Qwazaar is a character that I made up or something. So whatever you gather from the music is pretty much what you get when you speak to me.

Where were you born and how was your childhood?

I was born and raised on the south side of Chicago. I grew up on 29th & State and lived with my moms & pops and for the most part my 2 older brothers who ended up leaving home by the time I turned 12 I think. I actually got 3 brothers but the other one spent a lot of time between his moms crib and county jail. Thinking back, its kind of weird because you don’t really realize how messed up things are around you until you leave. Not that my life was super hardcore but there’s a lot of cats from my neighbourhood that didn’t make it. But as a kid I guess you get conditioned and everything is more of a routine. Like you know what point to cross the street at in case there’s a drive by and you get used to the police doing bogus raids and tearing up your crib every few months. But my parents always did a good job of talking to us about life in general and giving us a different perspective on everything around us. We lived in the projects but if you step inside our crib you wouldn’t know cause we took care our home and we always had a good Christmas and thanksgiving and such.

Is Chicago’s scene about to blow up or should we say that it already blew up with Twista, Kanye West or Common?

People been talking that “Chicago about to blow up” shit for so long, its ridiculous. And its not even when will Chicago blow up… Its more like when will the industry come through and rape Chicago of everything it has to offer and leave it dry in return. I don’t want to sound bitter but that’s reality if you’re an artist and you’re not fully aware of what you’re doing. To get back to the question: I think Chicago will blow as soon as the industry is finished milking the south.

Who do you think is the most under/overrated rapper in Chicago right now?

Haha… ya’ll trying to get me lynched or something. But realistically there’s nobody really doing there thing so much that they can truly be overrated. Being in Chicago it seems like you have to work three times as hard to get heard or to get anything/keep anything you got. Some people might look at cats like Twista and Kanye and say they’re overrated but Twista’s been doing his thing for like 15 years and Kanye has quite a few years on him as well and they’ve worked hard and learned some hard lessons in order for them to be in the position that they’re in now. 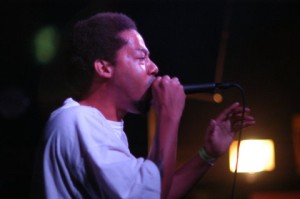 You’ll drop the long awaited second album “Civil Service” with your crew Typical Cats at the end of October. What can you tell us about it?

That it’s been a long time coming… nah… Well if cats want part 2 of the first album then you’re going to have a long wait. A lot of things have happened since that first album. A lot of new experiences, new frustrations, basically growth… I personally feel though, that the main theme of this album is gonna be skill. A lot of music that I hear from underground artists is either one or the other. It might sound ok but the content is lacking or they have all the metaphors and extremely complex rhyme schemes and screaming ‘fuck Bush’ but the songs sound like garbage. I guess we’re all firm believers that you can sound good and show skill and you can enjoy listening to our music all the same.

Was it hard to get all you guys in the studio at the same time?

Nah… I don’t think so. I mean we all have our schedules and such but when it came time for us to record we were all like lets do it. The hard part was getting us to be comfortable with whatever we spit. We’re all some extremely particular fickle artists who hate there own voice and such… perfectionists…

Can we consider one of you as the head of Typical Cats?

I don’t know about a head… We all pretty much do what we can do and get in where we fit in. I can definitely say that D.J. Natural is the head organizer though as far as coming up with a timetable for when we can get things started and finished. Without him organizing it could’ve easily been another couple of years before there was another album.

There’s been talk about a new Outerlimitz album, but in another interview I read that the only remaining members are you and H.e.l.l.s.e.n.t.?

Yeah Outerlimitz for the last 3 years has been made up of H.e.l.l.s.e.n.t., Silence formerly known as Chauncey Gardner, and myself. One of our guys went to college to play Ball, another decided to get his Hendrix on and learn a few instruments and quit rhyming, and when me and my Ex-girl split we kind of went our separate ways and she stopped rhyming for a minute. Everything’s all good though and we’re all cool. Maybe one day down the line we’ll do an Outerlimitz reunion album or something…

I haven’t heard a lot about H.e.l.l.s.e.n.t, so do you know what he is working on currently and did he drop anything yet?

H.e.l.l.s.e.n.t. is currently working on his debut album entitled “Rainwater” and he’s appeared on a few compilation albums.

Are there some other affiliations we should know about?

The Christian coalition for peace and love… nah just tripping, nothing as of right now. Even though there has been talk of forming a Wu Tang Clan like crew with all of the dopest cats from Chicago. But its still just talk right now… We’ll see…

What do you like more. The freedom of being your own boss when you record an album on your own or the work in a crew?

There are positives and negatives to both. I don’t really have a preference. Its whatever I feel like at the time, I like to have and idea and really see it through so that it comes out close to what I had in mind. But when you work with other people they can bring out something different in you that you never knew was there, if you have a dope crew they can really push you to be more creative and get better.

It’s been a long time ago when you released your first solo album. Don’t you think that its time for the next one?

I’m not sure about that yet. Its more of a what could I say on this album that I didn’t or couldn’t say on the such and such album. When I did “Walk Thru Walls” there was a lot going on that I didn’t feel I could say or didn’t know how to say on the typical cats album… We’ll see what happens after “Civil Service” and the “Suicide Prevention” album drops…

I can write in any situation or emotional state. Unfortunately pain seems to bring out the best songs. Going through stress and struggle will humble you and keep you sincere and usually those songs will always stay relevant.

Lyrically, where do you take your inspirations from?

If you mean artists there’s not a lot of cats that I learn from or that truly inspire me. Every now and then I’ll hear a song that’s really dope that’ll make me push harder to get better at what I do. I do admire groups like Outkast because they take chances and they inspire me to do more with my voice.

Do you think that you can move something with your lyrics?

I can move masses, move spirits, wake the dead and walk thru walls…

Is there a phase in your career you would consider as the most important one?

Every stage, every minute is just as important. The one thing that people must do in general is become more aware of what’s going on around them, whether it’s the music industry or the world itself or just your world.

All good must come to an end. Do you have any last words?

Thanks for giving me a second to share my thoughts. Thank you to everyone who supports anything that we’re involved with. And don’t forget the new typical cats album “Civil Service” in October, the new Outerlimitz album “Suicide Prevention” in February 05 and “Walk Thru Walls Revised” out by the end of the year. Peace.