Could you please introduce yourself?

Yeah, I’m Truth Universal, I’m an MC. Born in Trinidad/Tobago, raised in New Orleans, been there since I was 4 years old.

It’s like anywhere else. You deal with the same things like other states or cities deal with. It’s predominately black; it’s a high poverty level, unemployment. I guess oppression period, you know? But it’s also culturally rich, a lot of African culture has been preserved here, it’s evident in the music, a lot of jazz music. And the religion is strong voodoo. We have a strong voodoo presence here. That’s kind of what New Orleans is about right now. 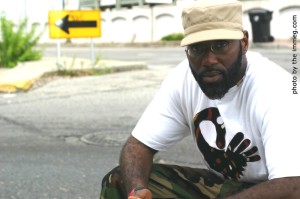 I don’t like to use that word, but yeah, New Orleans is a mixture of African, Caribbean, native American and French influences.

How did you get that name Truth Universal?

That’s my attribute. That’s from my studies from the Nation Of The Gods & Earths, and it’s just what I seek, I try to speak, I try to live universal truth.

Can you still remember the day you decided to make music? When and how did you get things started?

I mean, Hip Hop was just all around me and all was set as inceptional when I just started it. It’s just natural there. I’ve been a part of it, I liked what I was hearing, the format of the music. And the thing that I really did was a fan first just listening to stuff like the Fat Boys, Kurtis Blow, Melle Mel, Grandmaster Flash & The Furious Five and other groups from that time. I just really dug it and I wanted to be a part of it. At that time we were MCing, B-Boying, DJing and there was some Graff art but I wasn’t never really a part of that. But all other aspects I was a part of. When I originally started I wanted to be a DJ back in the mid-80’s. The first time when I got my first tape, my first music was in ’83, ’84.

Most people over here may know New Orleans as the city of Bling Bling – what’s your music all about?

My music is about social awareness, self-determination, I speak to an a bit for the dissent franchise. I speak on oppression, trying to bring a change. The thing with being a Bling Bling capital is that, that’s what you hear first. That’s what you hear first internationally and nationwide as the biggest thing along with Master P, No Limit and Cash Money. But just like if you think back at the west coast, the rap and hip hop phenomenon there, first you heard about the west coast doing the G-Thing, the Gangster Music or whatever. But after when the light was shown on the west coast that’s when you started seeing The Pharcyde, Hieroglyphics, Project Blowed and things of that nature coming to the forefront. It’s not that they weren’t there, it’s just that you didn’t see them, the spotlight wasn’t on them. And that’s how it is here. We have a growing underground and that’s Hip Hop period. And it’s purer, more pure forms are here. I have a problem with that too, man, I send people music and they are hesitant to open it because they think it’s gonna be the Bling in one line. And once they listen to it they like “okay”, they are more than often like that. 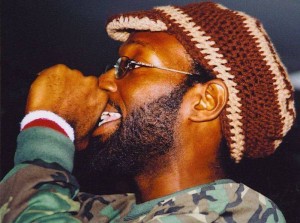 You told me that you have to deal with oppression and racism. Could you give me an example, how does racism look like in 2004?

That’s one of the questions I receive in a lot of interviews from Europe (laughs). How is racism? It’s part of American culture; it was founded on racism with an inception of whatever plans to take the land from the Indians. It’s like institutional. Let me see how I can tell you this matter, I really wanna be careful about how I break it down to you… We have a lot of unemployment and all the things I said before, we have high poverty level here and in New Orleans in particular. And in other large cities where we have a large concentration of black people. And with that poverty comes crime, and at time you have a lot of us being in prison and things of that nature. If you listen to my single “New Orleans Finest” and “Statistically Speaken” – I spoke about a personal incident what I experienced, just kinda like I came to this stuff first hand. My background is working class but I never was really on the streets hustlin’, sellin’ dope or whatever but I got caught up in that system. I’ve come to realize that it’s not just accidental, this stuff is planned (laughs). By the power brokers, the ruling class. There are certain people, just a few families, that own everything. A lot of people think whoever is in power does have a lot of money. But money doesn’t necessarily mean power, it just means you have a little more power than a poor person. But you may not be able to influence the climate of our country and world affairs. These things I think are controlled by billionaires such as the few families that are the wealthiest.

What’s your opinion about the attitude “revolutionary but gangsta”? Do you think it’s possible to live that way? Or is it just nonsense?

No, it’s not nonsense. It comes out of oppression. And that phrase really just means guiding that oppressed people and what ever they have been doing and turning it around and making something positive out of it. You know, it’s framed differently, but any movement like Zapatistas in Mexico, these are just poor people who have been exploited by the Mexican government for a long time, and they decided to take up arms. Armed revolutionists, armed strugglers are the last resort to any exercise of oppression on weaker people. So we’re already in a position – because we don’t have jobs we have little self worth and we’re trying to get what we can get. That’s were so called “Black On Black crime” comes into play. And it’s like more or less you have the skills to carry all such things but it’s directed in the wrong direction. So I think something like “revolutionary but gangsta”, what they are trying to say is: direct it in the right direction, direct it at the people who are actually hurting you and not people who are suffering just like you. So I don’t think it’s nonsense. 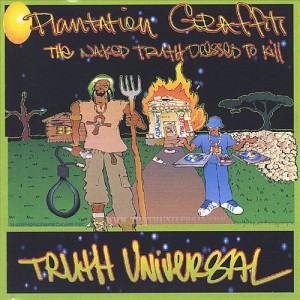 You’ve already released an EP called “Plantation Graffiti”. What’s the meaning behind this title and also the cover artwork?

Well ‘plantation’, that’s explaining the whole southern vibe and conditions ever since. They had an agricultural economy and they set up plantations and slaves were brought in as a free labor as on and so forth. And this is talking about the conditions of black people, what we’ve been through and where we’ve got since then. That plantation mind state still exists, it’s really playing on the southern vibe. And then ‘graffiti’ is a form of rebellion. People look at it like it’s a spoil of property or whatever but what it really is, it’s lashing out at the ruling class. So basically “Plantation Graffiti” is like rebellion against stuff like racism and oppression, just what has been carried on in the south for like decades. Makes sense? (laughs)

How do the reactions of the people look like? Do you get positive feedback for your music?

Yeah I get a lot of positive feedback. I do a lot of shows. Right now I’m taking a break while I’m composing new material but yeah, I do shows wherever I can. Hopefully I’ll be in Germany soon (laughs). Yeah I definitely get a lot of positive response, people are like “Hey, he’s from New Orleans and he does something totally different!” You know, when they actually listen to it it’s like always actually good music. They like “Oh, he actually has something to say also.”

Your latest release was the “New Orleans Finest Remix”, a twelve inch. I think it might be interesting to get some additional info on each track…

New Orleans Finest Remix That’s like a remake of the original from “Plantation Graffiti”, it’s not only a remake but an add-on with my man Gensu Dean from Dallas. He produces for a group called “Ill Relatives”, he used to produce for David Banner when he was with the group called “Crooked Lettaz” with Kamikaze. He called me up and said I have this track for you. It’s taken a different twist on that term ‘New Orleans Finest’. When you hear “a cities finest” you think about the police. I started up with “5-0 are known for brutalising black men”, so they are really not New Orleans finest. What it is – it’s a fucking police song on the low. But I also incorporate just that skillful Hip Hop vibe into it and it’s talking about the conditions of New Orleans and basically said it’s not really just reppin’ New Orleans, cause I’m not really into that although I do love, what I’ve learned, and it’s also saying: “Hey I’m in New Orleans, can you relate to this?” And if you can, that means the same things are going on wherever you are. So it’s really the same struggle. That’s what I’m really saying with that song.