Whassup MSane, how are you doing?

Let’s talk about your first steps in the rap game. When did you start to rap and what was your motivation to do it?

I started in 93. you know, just clownin with the homies. I later met this guy who had a old Tascam 4 track anda few key boards. He tought me alot. It was hard at first. I think being latin made it a little harder, but I was hungry and wanted to learn. He later took me to a big studio where I learned even more. I met DE shortly after and we were both working on albums at the time and started collabin. I think at the time he was the only one who loved the game as much as I did. 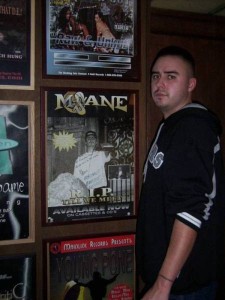 You released your first album “R.I.P. Till We Meet” in 1995. Your style was very different from nowadays in those days. What do you think when you look back now, are you still feelin that CD?

R.I.P was the beggining. I had alot of people telling me what I should and should’nt do. I look back now and wish that I would’ve taken more control over that album.

Tell us a little bit about how you grew up, please.

I grew up in Sacramento, CA. We lived in Lincoln Village. I always ran with an older crowd. I was like a sponge soaking up all I could. I look back now and am thankful for all I learned. The streets were always good to me.

I haven’t heard from you in a long time, what have you been up to during the last two years? Have you been working on any new projects?

Man, the last two years were crazy. I was workin on UNDA DA INFLUENCE recording up in the Bay area working with Andre Rivers. While at the same time working on PIMPIN & PANDERIN out in Fresno with White Chris. It was like trying to manage two complete different personalities. If you’ve heard both of these albums you’d know what I mean.

Can your listeners expect a new MSane album in the near future? If so, please tell us everything about it.

Yes. I am currently working with my producer Ace Mak. He’s tight, I’ve learned alot from him over the years. He just recently sent me a few 100 beats to listen to, so naturaly I’m writing again. I know on this next one I’ve gotta come different again. I’m trying to combine the mental state of UNDA DA INFLUENCE with that of PIMPIN & PANDERIN. So far it’s going well, but is at this point untitled, but I will keep you posted.

On your last album “Pimpin’ & Panderin'” there were snippets for a compilation called “Balla-Hollics”. What’s crackin’ with that, will it still be released?

BALLA-HOLLICS is a album I did with my homie WEGEE, he’s like family to me. He brought SHABBY DOO to the table and from their ACE produced the album. I had just finished with UNDA DA INFLUENCE and PIMPIN & PANDERIN, so for me it was not as fun recording as it was for them, I was tired. But watching them in the studio and seein them wanting to learn and having a good time brought back alot of good memories. The over all product in my opinion came out very well. It will be out summer 2005 due to a few distribution set backs.

On the siccness.net-forums you recently posted that there is no beef between you and the D.E. So has the beef officially come to an end? Has there ever been any beef at all and if so, what was it about?

I don’t think that their was ever any real beef. It was more like a misunderstanding. He gave me a track called P.A.B. and I was supposed to lay vocals on it for FU2. Well I decided at the last minute that I didn’t want any part of it. So I think that is why he spoke on me. I honestly thought it was funny. We’re coo though. 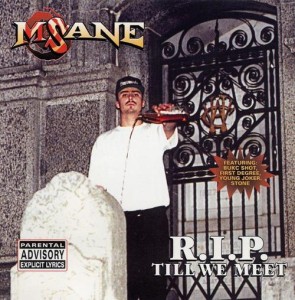 You’ve been doing music with First Degree The D.E. since 1995, he made guest appearances and produced beats for all of your albums. So what is it like to work with The D.E., what is he like? He must be a very interesting person.

Jeff Dixon and Brett Stanford produced R.I.P. But yeah, it’s always interesteing working with DE. He smokes, I drink, we collab, disagree a little, then comprimise and the final product usally ends up tight.

Any words about your beef with Brotha Lynch Hung and the Siccmade Family?

LOL, I knew that was coming. Their harmless! End of discussion. But I would like to send out my sympathies to his family for the recent loss of his sister. I don’t wish death on anyone.

I like them all, but PIMPIN & PANDERIN is my favorite.

The impact you can leave if you word things correctly. I like to have people skipping their cd’s back trying to catch the bits and pieces of game ive placed throughout the album.

With which well-known artist would you like to collaborate if you ever get the chance?

I don’t really care to much about how big the artist is, I care more about their vocal content and ability. But if I had to pick one, I’d love to do a album with SUGA FREE. That mutha fucas hard…

There are people who accuse you of copying E-40’s style. What do you have to say about it?

I take the comparison as a compliment. E40’s tight. I haven’t bumped nothing of his since IN A MAJOR WAY. But I love the classics. I don’t think I’ve copied anyone. No more than Ja Rule sounding like DMX, or Loki changing his flows on his new album in an attempt at sounding like Lynch. It’s art. If Yao Ming got caught in a sex scandle, would he be copying Kobe? 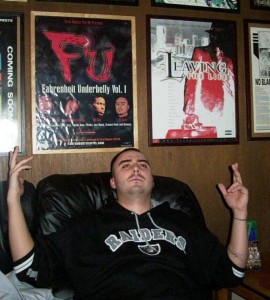 Could you enumerate five of your all-time favorite rap tracks?

Who are your favorite artists? Which CDs are you currently feeling?

I don’t have favorite artist, I have a great appreciation for talent. I might like a song an artist did, then not like nothing else but that song on his/her album. It’s hit and miss. Ive met people who have loved my work, than next time around were’nt feeling my next release. It’s all hit and miss. As for what im bumping right now, Suga Free… I can’t put his new shit down, he makes me want to write.

Are there any promising upcoming artists in Sacramento in your opinion?

I think Sacramento is ready for somthing new. Who ever the next to bubble may be, their going to have to do their homework, and look at what’s already been done. Lynch eats baby’s, I pimp hoes, Cbo goes to jail, and The De lives in the world of high. It’s all been done before, I think production will play a big part in Sacramento’s next big thing, as well as the ability to entertain with a new lyrical format, previously used topics can once again be listened to as new. But that’s just my opinion.

Did you ever release a vinyl single or LP? I’m asking because I have not yet seen any MSane vinyl, which is a pity.

No, nothing on vinyl.

Did you have any other appearances on wax yet, on a compilation for example?

I’m not sure, I’ve been on alot of shit, so maybe.

What are your future plans and ambitions? Where do you see yourself in about 15 years?

As for my plans, Im just playing the cards i’ve been delt. Taking things one day at a time. So to look 15 years ahead, I’d be lying to tell you what I see. I honestly don’t know what the future holds. I just hope that where ever I end up, their is music.

Here’s the place for some shoutouts, fuck yous or last words of any kind…

I’ve spoke enough on cd’s when it comes to all my “fuc you’s”, so I think I’m going to take this chance to say somthing positive: I would like to let my kids know that I love them very much. I have 3 now. My oldest daughter Monique, my son little Robert and we just had a baby last week. A little girl I named Nisha, after my best friend back home in california. They are what motivates me to succeed… And the fans, I THANK YOU FOR ALL OF YOUR SUPPORT.

Shoestring – Representin’ Till The World Ends ›